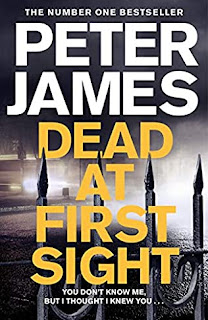 Whilst there are many happy stories of couples who have met on internet dating sites, this latest book by Peter James deals with the not so happy.  The book opens with retired John Charles Fordwater standing at Gatwick Airport in the arrival area, clutching a huge bouquet of flowers, tingling with anticipation for sight of the love of his life Ingrid Ostermann, who he met on a German web site.  But Ingrid isn’t coming, because Ingrid doesn’t actually exist.

The perils of internet dating are brought sharply into focus as we are presented with a retired NYPD cop who across the world waits in a bar in Florida’s Key West who also is waiting for the woman he believes is his soul mate.  Both men have been relieved of literally all their money and more besides.  And not only men are targeted – wealthy widows and divorcées are also eager to hear words of love from a handsome man. Many can’t believe their luck when some good-looking man seems to find them in their middle years attractive. But for these vulnerable people it’s not going to end well. For out there are people who will kill to keep their scams bringing in the money.

Penniless and in despair John Fordwater contemplates the unthinkable and people in similar situations in various places are not far behind him.

When Detective Superintendent Roy Grace is called to investigate the possible suicide of a woman in Brighton, he is struck by certain aspects that merit further examination.  It appears that her photograph has been used by Internet fraudsters. Moreover, an attractive married Brighton motivational speaker Toby Stewart reports to the police that he has been contacted by one Suzy Driver who has discovered his handsome face on several online dating sites.

The author skilfully weaves the individual threads from the various countries and gradually the picture of a huge international romance fraud emerges.  But who is the mastermind behind it?  Interspersed with the story are short chapters by someone we come to know as ‘Tooth’.  Not a pleasant person by all accounts, but clearly in the pay of the Mastermind of the operation, whoever he is.

Peter James was educated at Charterhouse and then at film school. He lived in North America for a number of years, working as a screen writer and film producer, before returning to England. His multiple award-winning, Sunday Times Top Ten bestselling novels have been translated into thirty-three languages. His writings reflect his deep interest in medicine, science and the world of the police. He has produced numerous films, including The Merchant of Venice, starring Al Pacino, Jeremy Irons and Joseph Fiennes. He also co-created the hit Channel 4 series Bedsitcom, which was nominated for a Rose d'Or. Peter James won the Krimi-Blitz 2005 Crime Writer of the Year Award in Germany, and Dead Simple won both the 2006 Prix Polar International award and the 2007 Prix Cœur Noir award in France. He us the author of the Detective Superintendent Roy Grace series. He divides his time between his homes in Notting Hill in London and Sussex.

www.peterjames.com
Posted by Lizzie at 14:15