‘Beneath the Blood Moon’ by Darren Wills 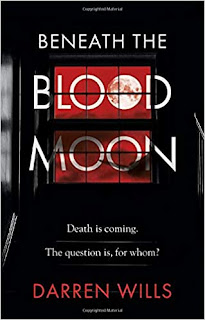 An unusual thriller, and all the better for that. It’s an interesting premise: we know almost from the start, thanks to interwoven chapters simply headed ‘Malevolence’, that someone is out to wreak havoc of some kind on an innocuous young couple, Dominic and Laura Walker – but we don’t know who, why or how.

The novel begins as Dominic is being interviewed by police. He is accused of killing his wife Laura, and events are related in the first person, from Dominic’s point of view. Dominic seems ambiguous over the murder, while he’s not denying it he’s not exactly admitting it either. He insists it’s very far from the straightforward, open-and-shut case the police believe it to be, and so our interest is piqued as he agrees to tell the detectives everything.

We go back to a birth thirty-five years earlier before zipping forward to Dominic and Laura, and their lives today. They’ve had a blip in their marriage – Dominic was unfaithful some time ago and Laura is only just learning to forgive him – but they’re trying hard to put that behind them and rediscover their old unity. But someone is out to get them.

The chapters are interspersed between Dominic’s relating of his and Laura’s lives and the short, malice-filled chapters by Malevolence. It’s a great device for ramping up tension and also establishing the relationship between Dominic and Laura. We become convinced that teacher Dominic is a mild-mannered man and very unlikely to have killed his wife, the love of his life, and forget that early chapter as we’re caught up in their everyday. Then something huge happens. I shall give nothing away apart from saying this is a page-turner that remains thoughtful and original despite the compelling pace, and I found myself unable to put it down in the final third. It’s very rewarding, and the ending satisfying.

I did find Dominic at times frustratingly passive and rather dim, but this never became a problem sufficiently serious to stop my reading or, mostly, my enjoyment. His is a well-drawn character even if not a wholly sympathetic one. There were certainly plausibility issues, but the storytelling was highly proficient, and I was more than content to go along with it.

While the standard of tehwriting was good, the standard of copy-editing was not quite what I'd expect. A thorough proofread by a seasoned professional would have picked up the many errors and it’s a shame that obviously didn’t happen. But again, the problem wasn’t so bad as to hinder my enjoyment. The device of ensuring the reader knew rather more than the main narrator, but very far from the full story, was skilfully exploited and more than made up for other deficiencies. A good read; recommended.
------
Reviewer: Dea Parkin
Darren Wills was an English teacher for over 30 years. He has a keen interest in crime (though his only criminal conviction is for hitchhiking on the motorway). Alfred Hitchcock provides his inspiration for his fast-moving thriller debut. He lives in Sheffield.