‘The Moscow Sleepers’ by Stella Rimington 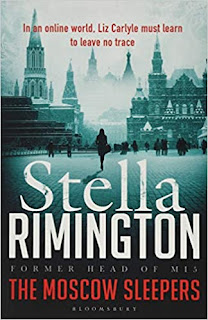 This is the tenth title in this series featuring MI5 operative Liz Carlyle.The author is the former head of MI5 and so is uniquely qualified to set stories in that world.

It begins in a hospital in upstate Vermont where a man – Lars Petersen - is dying. He has no visitors not even from the university where he had been teaching. Until, that is, a Canadian called Ohlson arrives, and the nurses, as they have been instructed, inform the FBI. Eventually, the information gets through to MI5, in particular, to Liz Carlyle and her friend and colleague Peggy Kinsolving. It seems that the dead man was a Russian Illegal, one of a number of deep-cover spies infiltrated by the then Soviet Union into the USA and elsewhere, to go to ground until called upon. Liz and Peggy are aware of these Illegals and have in fact already been instrumental in the unmasking and expulsion from the UK of two other Illegals. They had acted upon information supplied by a man called Mischa, himself an Illegal who had turned against the Putin regime, an action which put him in danger. He has gone to ground in Tallinn in Estonia but when Liz receives a postcard with a coded message to meet in Berlin she must go undercover, calling herself Liz Ryder, It is dangerous; Germany may now be united but it is still full of Russian spies. In return for information about a continuing Russian spy operation in the UK, Mischa wants asylum not just for himself but for his brother, Boris Bebchuk, an army high-up who tends to be indiscreet when he is drunk, as he often is.

There is also a Russian sleeper in Brussels, an EU bureaucrat called Dieter Nimitz. He is a long-term plant who has been living a very quiet life and is anxious to keep it that way. He is married but the marriage is not a happy one; his wife, headmistress of a school in Hamburg is disagreeable. When he finds a letter referring to one of his wife’s pupils who has disappeared and then discovers that someone has been visiting his wife when he is away from home, he is uneasy and refers all this to a colleague at his work whose husband is married to someone at the British Embassy. Later, searching through his wife’s files, he finds a reference to a school, the Bartholomew Manor College in Suffolk. This is passed on to Liz who decides that there is something strange about the school which it makes it worth investigating, which she does, along with her latest love interest, Chief Constable Richard Pearson, who also has suspicions about the schools. And their suspicions about the school are more than justified. But there are those who are prepared to resort to violence, even murder, to prevent the school’s secrets from being revealed.

At the same time, it becomes clear that not just Mischa but his brother should be sprung out of Russia to protect them both and Liz’s colleague Bruno Mackay, a diplomat at the British Embassy in Moscow should do this. But can Mischa, and particularly his brother, be entirely trusted or is it Bruno who is in greater danger?

What makes this novel, like all the author’s previous novels, stand out is the authenticity provided by her experience as head of MI5. We know from stories in the media that Russia, and previously the Soviet Union, has made many attempts to infiltrate the secret services of Western European countries and The Moscow Sleepers well portrays those attempts and the meticulous and painstaking way in which the security services of this and other countries investigate and deal with those attempts.
------
Reviewer: Radmila May

Stella Rimington joined the Security Service (MI5) in 1965 and during her career she worked in all the main fields of the Service's responsibilities - counter-subversion, counter-espionage and counter-terrorism - and became successively Director of all three branches. She was appointed Director-General of MI5 in 1992. She was the first woman to hold the post and the first Director-General whose name was publicly announced on appointment.

Radmila May was born in the U.S. but has lived in the U.K. since she was seven apart from seven years in The Hague. She read law at university but did not go into practice. Instead she worked for many years for a firm of law publishers and still does occasional work for them including taking part in a substantial revision and updating of her late husband’s legal practitioners’ work on Criminal Evidence published late 2015. She has also contributed short stories with a distinctly criminal flavour to two of the Oxford Stories anthologies published by Oxpens Press – a third story is to be published shortly in another Oxford Stories anthology – and is now concentrating on her own writing.
Posted by Lizzie at 16:46