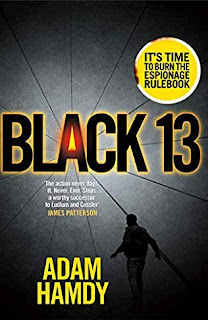 Scott Pearce, ex-MI6 officer, is in Thailand pursuing his own agenda under an assumed name when a red-haired woman introduces herself to him in a bar using his real name. This is on page 24. From that moment that Melody Gold blows his cover she and Scott are on the run, pursued by dangerous people. But who are they and why do they want to kill them?

The news that Melody gives Scott of the death of the PI that her law firm Denton Fraser had employed and the method of his death convinces Scot that he must return to Britain to find out who killed his friend. All Melody can tell him is that her boss taking instructions from a client learned something that scared him, and he sent her half way around the world to locate Scott, but she doesn’t know what he discovered, just that it’s connected to a big bank.

Back in the UK the danger only intensifies as Scott realises, they have already picked up a tail.  Although it becomes clear that Melody has no more knowledge than she has already revealed, she is clearly at risk. And so, Scott enlists the aid of his friend from way back Wayne Nelson to act as a bodyguard for Melody.  Constantly on the move dodging thugs and bullets, Scott endeavours to uncover just what the hell is going on. Whatever it is it is big, and the orchestrators have a lot of manpower. Every way Scott and Melody turn there are people trying to kill them. Having ditched anything that could contain a tracker Scott turns to another old friend, but they are greatly outnubered. These people are clearly well-equipped and there are a lot of them, and they want Scott and Melody dead.  And these killers leave their calling card ‘Black 13’.  Just who are Black 13?

This is an amazing read. A fast paced and exciting thriller you will not be able to put down.  And all the way through you are thinking just what is it – what is so big?  And who is the client?

Compulsive and intriguing book will draw you in, fascinate and terrify you in equal measures.  Not to be missed. Most highly recommended.
------
Reviewer: Lizzie Sirett