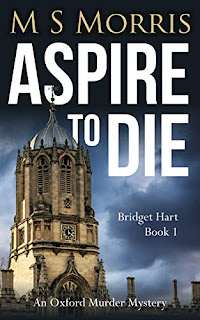 In Aspire to Die, the first in this new series, Bridget Hart has only just attained the rank of Detective Inspector in the Thames Valley Police. On the day of her daughter Chloe’s fifteenth birthday Bridget has taken the first day of her annual holiday off to bake Chloe a large (and calorie-laden) chocolate cake to be followed that evening by a meal at an Italian restaurant in North Oxford. But then there is a call from Bridget’s boss, Chief Superintendent Alec Grayson who tells her of the suspicious death of a female student at Christchurch College and orders her to get down there straightaway to lead the investigation with her team. Bridget has no choice but to obey: this promotion has taken long enough because when the breakup of her marriage resulted in her being left as the sole carer of her daughter, her progress up the career ladder had been slow.

The murdered girl is Zoe Hamilton, daughter of the media tycoon Sir Richard Hamilton, and everybody, it seemed, loved her. She was beautiful, kind and intelligent, a favourite with academics and fellow undergraduates alike. But investigation into her private life reveals a rather more complicated picture. She recently parted company with her boyfriend Adam Brady who had been upset and angry by the break. She had a twin brother Zac and they had been as close as only twins can be, but there were strong political differences between them, Zac who has political ambitions being very much on the right, Zoe on the other very much on the left and into all sorts of causes. However, Zac’s girlfriend Verity insists that he would never have harmed her. Then there is her tutor Dr Anthony Claiborne, and the Dean (principal) of Christchurch: Bridget senses something evasive about both of them. Examination of CCTV by members of Bridget’s team, particularly Detective Sergeant Jake Derwent, determinedly Northern working class and feeling distinctly awkward in the socially exclusive atmosphere of Oxford’s most famous college, and Detective Constable Ffion Hughes, equally determinedly Welsh and determinedly bi-sexual (much to the chagrin of some of her colleagues in the Oxford police), reveals that the alibis of many of those who could have had a motive to kill Zoe are not as strong as was first thought. Meanwhile DS Grayson is pressuring Bridget to get on with the investigation, and Bridget’s sister Vanessa keeps trying to set Bridget up with new men. Eventually, however, the mystery of Zoe’s murder is solved with a highly dramatic conclusion in Christchurch itself. 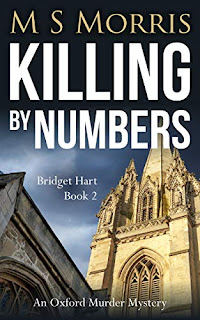 In Killing by Numbers, the second in this series, the victim is the gentle and reclusive  Gabriel Quinn, a talented young artist, just about to achieve recognition, who is shot by a man in a car while cycling along Oxford’s High Street. He had come from the art gallery where his paintings were being displayed and was on his way to call on someone else when the shooting occurred in front of a crowd of tourists. They rush to assist him, but too late although before he finally loses consciousness, he is able to gasp a long number, important to him but meaningless to his would-be rescuers. It looks like a gangland killing, but is it?

D.I. Bridget Hart is assigned by her boss, Superintendent Grayson to the investigation along with her team, DS Jake Derwent and DC Ffion Hughes, the office tech wizard, Vikram (Vik) Vijayaraghaven, the chief scene of crime officer, and two other sergeants, the macho Ryan Hooper and the stolid Andy Cartwright. They set about establishing Gabriel’s contacts to see if anyone, no matter how apparently blameless, could have possible links to gangs. There is Amber Morgan, his girlfriend although she was also shared by fellow-artist, Hunter Reed; the arrogant Melissa Price, Gabriel’s tutor at the Ruskin School of Art; Todd Lee who runs an artists’ materials supply shop in the Turl (was that where Gabriel was headed when he was shot?); the businessman Lawrence Taylor who had bought Gabriel’s paintings (the value of which would increase dramatically after his death; the middle-aged hippy, Harriet Watson who had the next canal boat along from Gabriel’s own canal boat; Michael Henderson, Professor of Mathematics, who might just be able to cast light on the number gasped out by Gabriel with his dying breath: Gabriel, it seems, was obsessed by numbers and obscure mathematical formulae. And, awkwardly for Bridget, Jonathan Wright, owner of the art gallery where Gabriel’s paintings were displayed, with whom Bridget is just beginning to start a relationship engineered by her sister Vanessa.

Then, the last thing Bridget wants, is the appearance of her ex-husband Ben as leader of a team sent by the Metropolitan Police to investigate the possible drugs connection. Relations between them, never good, are made more difficult by Ben deciding he will take an interest in their daughter, after years of neglect. And during the course of his investigation he never fails to belittle Bridget in public although doing so with all the charm which is his greatest weapon.

And then there is another death.

Both these books are good straightforward police procedurals with entertaining and realistic characters and plots that are intricate and yet entirely logical. At the same time they convey an accurate picture of Oxford today, not just the dreaming spires and ancient colleges that we so very strongly connect with the city but also the traffic-choked streets, the homeless men and women who crouch in shop doorways asking for handouts (who can occasionally provide useful information), the sprawling council estates that ring the city, and the vibrant ethnic communities which throng the parts of Oxford to which tourists never venture. Two more titles in the series are forthcoming: Do No Evil and In Love and Murder. No doubt there will be others,
Recommended.
------
Reviewer: Radmila May 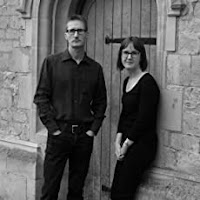 M S Morris is the pseudonym for the writing partnership of Margarita and Steve Morris. They both studied at Oxford University, where they first met in 1990. Together they write psychological thrillers and crime novels. They are married and live in Oxfordshire.

Radmila May was born in the U.S. but has lived in the U.K. since she was seven apart from seven years in The Hague. She read law at university but did not go into practice. Instead she worked for many years for a firm of law publishers and still does occasional work for them including taking part in a substantial revision and updating of her late husband’s legal practitioners’ work on Criminal Evidence published late 2015. She has also contributed short stories with a distinctly criminal flavour to two of the Oxford Stories anthologies published by Oxpens Press – a third story is to be published shortly in another Oxford Stories anthology – and is now concentrating on her own writing.
Posted by Lizzie at 16:24