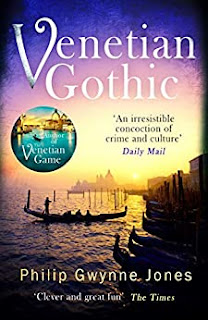 This is the fourth title in the series depicting the adventures (with various mishaps) of Nathan Sutherland, Honorary British Consul for Venice. His position, despite the apparent grandeur of the title, is unpaid; he is expected to render such assistance and advice to British citizens as he can (not very much) and to represent Her Majesty’s Government when called upon to do so. It is in this latter capacity that he finds himself, while on an informal visit with some friends to the cemetery island of San Michele on November 2nd, All Souls Day, being urgently requested by the Anglican priest, Father Michael Rayner, to read a suitable passage from the Bible to the small congregations at the cemetery’s Protestant church. And while Nathan is accompanying Father Rayner to the church a strange discovery is made during maintenance work in the graveyard: the coffin of a child is accidentally opened and the coffin is empty. Father Rayner, accompanied by Nathan in his capacity as British consul, has to report this to the local police (Nathan’s friend Vanni). The grave was that of a young boy, Gabriel Loredan; 40 years ago he had been drowned in one of the Venetian lagoons. Gabriele had been the son of a once well-known celebrity Hugo Channing and Cosima, daughter of an ancient Venetian family; although according to Italian custom, the boy took his mother’s surname but still had British nationality. Thus, establishing what has happened to the boy’s remains is Nathan’s responsibility. He would really like to devolve this to the British Ambassador in Rome but the latter, beset on all sides by British citizens resident in Italy desperate to ascertain their future status post-Brexit, insists that the task is down to Nathan.

And this leads Nathan, along with his girlfriend Federica and his biker and rock music fan chum Dario, down all sorts of blind alleys. The boy’s death from drowning in one of the Venetian lagoons was widely reported at the time but actual records of the boy are scarce, suspiciously so despite the long interval between the death and the discovery of the empty coffin.

A British journalist, Guy Flemyng, is pursuing Nathan for information; he insists that his enquiries are for a book he is writing but is there more to it than that? Hugo Channing is suffering from dementia and so cannot assist Nathan with information although he does refer confusedly to ‘The Circle’ and ‘The Isle of the Dead.’ But his daughter Ludovica is very protective of both her parents and essentially blocks Nathan from further enquiries. And then a British backpacker, who had previously come to Nathan with accommodation problems, is found dead in the lagoon with a head wound.

There is an elegiac tinge to this book although Nathan’s relationship with Federica, not to mention his cat Gramsci, provides a lighter tone. The problems with aqua alta (the annual floods) are increasing and the Venetians themselves are slowly but surely abandoning the city while the apartments where they would live are gradually being turned over to holiday lets. A good addition to this entertaining series.
------
Reviewer: Radmila May 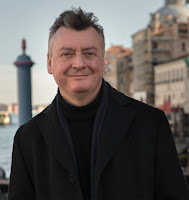 Philip Gwynne Jones first came to Italy in 1994 when he spent some time working for the European Space Agency in Frascati, a job that proved to be less exciting than he had imagined. He spent twenty years in the IT industry before realising he was congenitally unsuited to it, and now works as a teacher, writer and translator. His first novel, The Venetian Game, was Waterstones Thriller of the Month for March 2018, and a Times Top 5 bestseller.  Vengeance in Venice, the second novel in the Nathan Sutherland series, was chosen as the Waterstones Welsh Book of the Month for April 2018. The third novel in the series, The Venetian Masquerade followed in April 2019. He lives in Venice with his wife Caroline. He enjoys cooking, art, classical music and opera; and can occasionally be seen and heard singing bass with Cantori Veneziani and the Ensemble Vocale di Venezia. To read reviews of th first three books in the series click here. Venice with Philip Gwynne Jones.

Radmila May was born in the U.S. but has lived in the U.K. since she was seven apart from seven years in The Hague. She read law at university but did not go into practice. Instead she worked for many years for a firm of law publishers and still does occasional work for them including taking part in a substantial revision and updating of her late husband’s legal practitioners’ work on Criminal Evidence published late 2015. She has also contributed short stories with a distinctly criminal flavour to two of the Oxford Stories anthologies published by Oxpens Press – a third story is to be published shortly in another Oxford Stories anthology – and is now concentrating on her own writing.
Posted by Lizzie at 16:27