‘The Final Straw’ by Jenny Francis 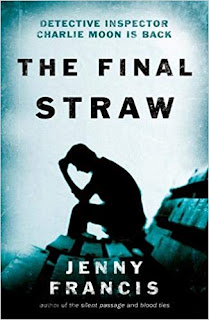 This is the third in the series featuring DI Charlie Moon, of the West Midlands Police, and his journalist side-kick Jo Lyon, set in my beloved Birmingham.

The action takes place in 2001, when the police were still dealing with the repercussions of the malpractice of the infamous Serious Crimes Squad, which was given to summary justice and much internal corruption – some of which still lingered at the start of this century.

Moon is tipped off by an inmate of what was then called Winson Green Prison that a miscarriage of justice resulted in the imprisonment of an obviously innocent man, held in much affection by his fellow cons, who are incensed when he commits suicide. Although Moon is under warning for flouting police rules, he can’t resist investigating, using Jo Lyon’s newspaper contacts to help him fly under the radar. Even when he discovers his office has been bugged and efforts are being made to break up his loyal team he persists, uncovering heinous crimes and vile cover-ups.

Despite its cracking plot, I would have welcomed some of the issues raised dealt with in greater detail. Also, Birmingham could have been more than just the background. Similarly, the relationship between Moon and Lyons and the Moon family dynamic could have been questioned, and better still explored.
------
Reviewer: Judith Cutler

Jenny Francis is the pen name of Patricia Scudamore and Hilton Catt who write both business and careers books, as well as crime thrillers.  You can find out more by visiting:
www.meetjennyfrancis.com

Judith Cutler was born in the Black Country, just outside Birmingham, later moving to the Birmingham suburb of Harborne. Judith started writing while she was at the then Oldbury Grammar School, winning the Critical Quarterly Short Story prize with the second story she wrote. She subsequently read English at university. It was an attack of chickenpox caught from her son that kick-started her writing career. One way of dealing with the itch was to hold a pencil in one hand, a block of paper in the other - and so she wrote her first novel. This eventually appeared in a much-revised version as Coming Alive, published by Severn House. Judith has seven series. The first two featured amateur sleuth Sophie Rivers (10 books) and Detective Sergeant Kate Power (6 Books). Then came Josie Wells, a middle-aged woman with a quick tongue, and a love of good food, there are two books, The Food Detective and The Chinese Takeout. The Lina Townsend books are set in the world of antiques and there are seven books in this series. There are three books featuring Tobias Campion set in the Regency period, and her series featuring Chief Superintendent Fran Harman (6 books), and Jodie Welsh, Rector’s wife and amateur sleuth. Her most recent series features a head teacher (3 books). Judith has also written three standalone’s Scar Tissue, Death In Elysium and The Wages of Sin.
http://www.judithcutler.com.
Posted by Lizzie at 14:41