‘Strangers at the Gate’ by Catriona McPherson 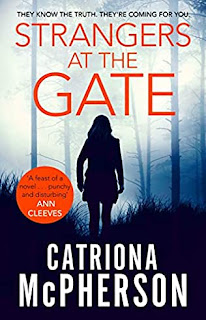 Finnie Doyle and Paddy Lamb met at a party and fell in love, immediately and irrevocably. They married and for a year lived in a tiny, cold flat in Edinburgh while Paddy finished his legal studies and Finnie worked part-time as deacon in a Church of Scotland parish which involved more or less fulltime work as an assistant to the minister and caring for those in the parish who required not only sympathy but practical assistance. Things get even better when Paddy lands a job as a partner in a legal firm in a small town, Simmerton, in the Scottish Midlands, and Finnie also finds a job as a part-time deacon attached to the local church. Not only that, but the head of Paddy’s legal firm, Lovatt Dudgeon, offers accommodation in a gatehouse attached to the house where Lovatt and his wife, Tuff, live in a house called Widdershins. The name makes Finnie feel uneasy: ‘widdershins’ is a Scots dialect word associated with bad luck and the uncanny. But Paddy laughs at such superstition and is insistent that they take advantage of the offer: as they got a good price for their Edinburgh flat they will be able to advance further up the housing ladder. So they move in; although Finnie finds the location, in a dense wood, unnerving.

On their first night in their new home, she and Paddy accept an invitation from the Dudgeons for supper. The elderly Dudgeons are delightful, and Paddy and Finnie are charmed by them. But just after leaving Finnie realises that she had left her handbag and Paddy some papers in the house. They retrace their steps and to their horror they find their hosts’ dead bodies. Finnie wants to call the police, but Paddy begs her not to: he has a past which if found out could result in him being struck off and unable to practise. Reluctantly, Finnie agrees she too has something in her past which could make problems for her in her deaconship. So, they decide to hide their discovery of the bodies, believing that they will be found by someone before long. But the bodies are not found, and Paddy and Finnie grow more and more distraught as time goes by.

This is very much a novel for those who like twisty psychological thrillers and is an excellent example of the genre. I found it compelling reading.
-------
Reviewer: Radmila May 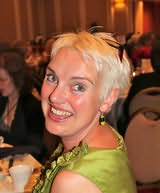 Catriona McPherson was born in South Queensferry. After finishing school, she worked in a bank for a short time, before going to university. She studied for an MA in English Language and Linguistics at Edinburgh University, and then gained a job in the local studies department at Edinburgh City Libraries. She left this post after a couple of years and went back to university to study for a PhD in semantics. During her final year she applied for an academic job, but left to begin a writing career. These days, McPherson lives with her husband on a farm in the Galloway countryside, where she spends her time writing, gardening, swimming and running.

Radmila May was born in the U.S. but has lived in the U.K. since she was seven apart from seven years in The Hague. She read law at university but did not go into practice. Instead she worked for many years for a firm of law publishers and still does occasional work for them including taking part in a substantial revision and updating of her late husband’s legal practitioners’ work on Criminal Evidence published late 2015. She has also contributed short stories with a distinctly criminal flavour to two of the Oxford Stories anthologies published by Oxpens Press – a third story is to be published shortly in another Oxford Stories anthology – and is now concentrating on her own writing.
Posted by Lizzie at 14:31