The Mystery of the Three Orchids by Augusto De Angelis 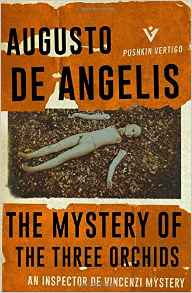 Milan 1938 and in the fashion house of Christiana O’Brian the showing of the season’s latest designs is in full swing. But the unexpected appearance of someone that Christiana doesn’t want to see causes her to rush out of the showing. That someone is a woman called Anna Sage, sister of Christiana’s ex-husband Russell Sage, business tycoon and former bank robber now freed from prison, Russell Sage. Is Russell himself now in Milan? Does he suspect Anna of having betrayed him to the Chicago police? But when the distraught Christiana seeks refuge in her bedroom, there is a corpse on her bed. It is her employee, the youthful Valerio, and he has been strangled. Detective Inspector De Vincenzi of the Milan Police is the investigator and he needs all his subtle intellect and intuitive powers to unravel the mystery. In the end he does so and confronts the main participants – Christiana herself, Anna Sage, Madam Dolores Firmino the company’s artistic director, Prospero O’Lary the company secretary, Marta the company’s director. Some of them are lying, but only one is the murderer.

For me, the main interest of this book arises from the author’s position as, according to the informational material accompanying the text, the first native Italian mystery writer, although crime fiction had been extremely popular in Italy for some years and the publisher Mondadori had a full list of British and American titles in his giallo list. And much in The Three Orchids is reminiscent of classic Agatha Christie, in particular the final confrontation scene. Tragically, De Angelis fell foul of the Fascist regime of Mussolini which was critical of anything that could be implied as criticism of the regime, was imprisoned and on his release was beaten up by fascist thugs and later died of his injuries. But I wish could be more enthusiastic about the book itself, some of the author’s observations would raise eyebrows today: ‘Lying and distraction come easily to women; their deviousness is automatic’; ‘How could one distinguish truth from falsehood in a woman’s statements, and how could one find logic in her words and actions?’ ‘Science and statistics tell us that it is much more common to find criminal brilliance in women than in men.’ Not the sort of nonsense that the great Agatha would have uttered. Nor the great Margery or the great Dorothy L. Nonetheless The Three Orchids is of considerable historic importance.
------
Reviewer: Radmila May

Augusto De Angelis (1888-1944) was a Italian novelist and journalist, most famous for his series of detective novels featuring Commissario Carlo De Vincenzi. His cultured protagonist was enormously popular in Italy, but the Fascist government of the time considered him an enemy, and during the Second World War he was imprisoned by the authorities. Shortly after his release he was beaten up by a Fascist activist and died from his injuries. The Murdered Banker and The Hotel of the Three Roses are also available from Pushkin Press.