‘Cheating the Hangman’ by Judith Cutler 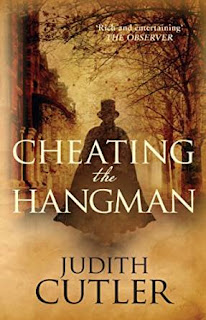 Reverend Tobias Campion is the well-meaning rector of the parish of Moreton, St Jude’s.  He is a dedicated young man, happy to fulfil his priestly role, although his choice of profession has estranged him from his noble father, Lord Hartland, who had hoped his son would follow a military career.

A chilling prologue sets the scene for this gritty, yet elegant, Georgian murder mystery.  The novel is faithful to its historical context; deference and decorum imbue the text, whilst the social inequalities that prevailed at the time are evident in the juxtaposition of wealth, enjoyed by Campion’s rich family and friends, and poverty, the lot of many of his parishioners.

After a surprise visit from his archdeacon, Campion finds himself the unwilling caretaker priest of All Souls Church in Clavercote whose own rector, the Reverend Adolphus Coates, has suddenly gone abroad to seek a health cure.  Following his delivery of the Easter morning service at Clavercote, Campion decides to ride home through the woods.  The day of resurrection, bathed in Spring sunshine, is marred when he makes a grotesque discovery - a decomposed corpse nailed to a tree.  Campion, Dr Edmund Hansard and Hansard’s wife, Maria, launch themselves into a perilous investigation that exposes some unholy happenings in the detective-clergyman’s temporary parish and puts them all in danger.

Judith Cutler’s clerical sleuth enjoys guilty pleasures, like riding his magnificent horse, Titus; wearing fine clothes; and enjoying a glass of Chablis or Madeira.  Notwithstanding the horror of the events that unfold as the book progresses, Campion narrates his memoir with self-deprecating frankness and humour.  He accompanies the reader through numerous enigmatic twists with the charm of an amiable companion, an experience that I enjoyed immensely.
------
Reviewer: Dorothy Marshall-Gent