‘Rivals of the Republic’ by Annelise Freisenbruch 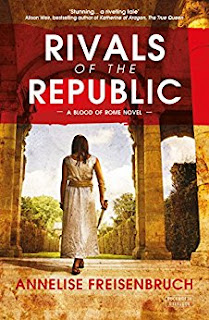 Rivals of the Republic portrays 70BC Rome as a brutal and conflict-riddled society in which powerful men vaunt their military prowess and political acumen as they vie for election to high office.  Public life is male-dominated whilst women are expected to confine themselves to the domestic sphere and to be seen rather than heard.  Not so Hortensia.  Brave and intelligent, the novel’s female protagonist confronts the self-assured belligerence of a group of villainous men as they plot to overthrow the Republic to which they profess allegiance.

Hortensia has already proved herself to be an orator of flair and skill when the Temple of Vesta is overshadowed by the mysterious death of a Vestal Virgin.  She is asked to investigate the incident and her enquiries expose a treacherous conspiracy against the state and lead her into a dangerous world of intrigue and corruption.  Hortensia jeopardises her reputation and her life when she begins to unravel the puzzle of the Vestal’s death.  As she inches ever closer to the truth she finds herself alone and in peril.  Can her loving husband Caepio rescue her?  What has happened to her loyal slave, Lucrio?  Will the courageous Fabia, become the murderer’s next Vestal victim?

Hortensia’s character is based on the real-life daughter of Quintus Hortensius Hortalus a Roman orator who was appointed consul in 69BC, and Rivals of the Republic is the first novel in Annelise Freisenbruch’s Blood of Rome series.  The book captivated me from start to finish.  Evocative descriptions of cool, spacious, cypress-lined avenues on the wealthy Palatine and the cloying heat of Rome’s congested city streets, immerse the reader in the sights, sounds and smells of the Eternal City.  The work is rooted in historical accuracy, and the research that underpins Hortensia’s adventure enhances a gripping tale that is highly entertaining throughout.
------
Reviewer: Dorothy Marsahll-Gent

Annelise Freisenbruch was born in Bermuda in 1977. She has a PhD in Classics from Newnham College, Cambridge, and is the author of the highly-acclaimed history of Rome's empresses, The First Ladies of Rome. Blood in the Tiber was her first novel.