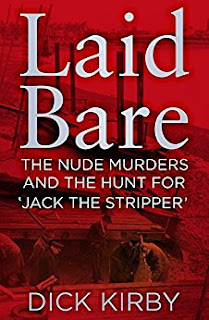 The Jack The Stripper murders began in London in 1959 before I was born so reading about them in Dick Kirby’s latest opus was a first for me.  The killer has never been caught. He claimed a total of eight female victims, all prostitutes, and removed their clothing after death before leaving the bodies beside the Thames and the surrounding area. The author makes the point that, in Victorian times, these women were referred to as `unfortunates’ and, reading of their numerous failed relationships, neglected children and disease-ridden bodies it is easy to understand why.

Several of the women had their dentures or teeth knocked out, causing detectives to speculate that they were asphyxiated whilst performing an intimate act on the killer. Kirby is explicit about this so it’s very much a book aimed at an adult audience.

He spoke to former Scotland Yard police officers whilst researching the case (he’s a former member of the Flying Squad) and, though most are in their eighties and nineties, they still recalled this most infamous unsolved crime. Several of the female detectives had to pose as ladies of the night in the hope of catching the killer though their male colleagues kept a close watch on them to ensure that they weren’t forced into a car or van.

Kirby looks at the most likely suspects but also puts the murders in their historic context with mention of the Kray twins, Moors Murders and the Profumo affair. He refutes the findings of other authors regarding the most likely culprit and believes that our best chance of finding the identity of the killer – probably long dead – lies in someone finding an old trunk containing the serial killer’s trophies including the missing teeth.

This opus, which is written in Kirby’s take-no-prisoners style and includes his trademark humour, will appeal to police buffs and true crime historians alike.
------
Reviewer: Carol Anne Davis.

Dick Kirby joined the Metropolitan Police in 1967, and during the next 26 years spent half of his service with Scotland Yard s Serious Crime Squad and the Flying Squad. He is now a true crime historian, having written numerous books including Villains, The Sweeney and The Wrong Man.

Carol Anne Davis was born in 1961 in Dundee 1961. She went to Dundee University and and gained a Master of the Arts degree in English and Social Administration. The latter included criminology which complimented her obsession with true crime. After graduation, Carol started working with battered and emotionally-abused women. This was a year-long post and at the end of it did a postgraduate diploma in Adult & Community Education at Edinburgh University. Carol is the author if fifteen books.