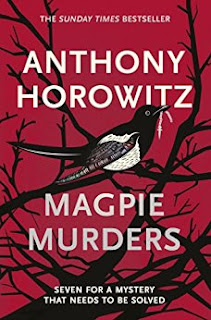 Someone once said that the most difficult review to write is for a book that is so brilliant you don’t know if by a short review you can do it justice. This is one of those books.

When editor Susan Ryeland receives the latest Atticus Pünd book, the ninth in the series, she settles down for an enjoyable evening.   She may dislike the author Alan Conway, but he does write a good whodunit.

Magpie Murders is set the 1950’s in the fictitious village of Saxby-on-Avon.  The story opens with a funeral.  As the story progresses Susan begins to get an odd feeling about the book, not that it isn’t a good mystery – it is - full of fascinating characters, and many intriguing suspects, but there is something just slightly off.  Annoyingly she discovers that the last chapter is missing.  Back at her office at Cloverleaf publishers she discovers that there is no trace of the last chapter and so she sets out to track it down.

As Susan ferrets around in her search for the missing chapter I greatly enjoyed the descriptions of the machinations of the characters in the daily life in a publishing company.

Cleverly constructed this is a book within a book. To solve a murder you need to find the clues that are hidden within the fictional murder mystery. I love puzzles and am proud to say that I did solve one aspect.  But not the identity of the killer.

Brilliantly plotted, this is an enthralling mystery that I could not put down.  Highly recommended.
------
Reviewer: Lizzie Sirett 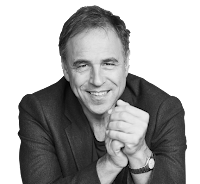 Anthony Horowitz is one of the most prolific and successful writers working in the UK – and is unique for working across so many media. Juggling writing books, TV series, films, plays and journalism. Anthony has written over 40 books. Anthony  was commissioned by the Conan Doyle Estate and Orion Books to write two new Sherlock Holmes novels. The House of Silk was published in November 2011 and was internationally lauded as the top title of the autumn. The sequel, Moriarty, was published in October 2014 with similar success. Most recently he was commissioned by the Ian Fleming Estate to write the James Bond novel Trigger Mortis, which was published on 8th September 2015.  Anthony is responsible for creating and writing some of the UK’s most beloved and successful television series, producing the first seven episodes (and the title) of Midsomer Murders. He is the writer and creator of award-winning drama series Foyle’s War, which was the Winner of the Lew Grade Audience award for BAFTA.  Anthony's latest show New Blood will premiere on BBC iPlayer later this year.
Anthony is on the board of the Old Vic Theatre. He regularly contributes to a wide variety of national newspapers and magazines on subjects ranging from politics to education and currently has a travel column in The Telegraph. He has been a patron to East Anglia Children’s Hospices and the anti-bullying charity, Kidscape, since 2008. Anthony was awarded an OBE for his services to literature in January 2014.

http://www.anthonyhorowitz.com
Posted by Lizzie at 12:48