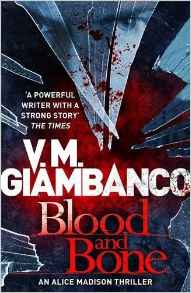 This is the third in this series featuring Detective Alice Madison of the Seattle Police Homicide Unit. Madison herself had a deeply troubled childhood; this has fed through into her adult life; her personality is angry and she reacts with fury to any attempt to bully but beneath all that is a visceral sadness. Her current lover, childhood friend Aaron Lever, is kind and understanding but even so cannot reach through to those inner depths. She does also have an essential integrity which commits to the pursuit of criminals and the upholding of justice. But that has got her into trouble with some of those in authority, namely, agents of the Los Angeles Drug Enforcement Agency: some years ago, when John Cameron, good friend of Madison’s previous lover, the lawyer Nathan Quinn, was in danger of being killed by members of a drug cartel she had shot and killed one of those threatening them. Now the agents inform her that Cameron has been acting a self-appointed executioner of the other members of the cartel; Madison had saved the life of a serial killer. When her relationship with Quinn is also held against her, she retorts that Quinn may have once been a ferocious defence lawyer, but he is now Senior Counsel to the U.S Attorney of the Western District of Washington State. Not a lot the DEA agents can say to that!

In any case Madison has too much currently on her plate: the brutal murder of Matthew Duncan, in a peaceful suburb of Seattle, while his wife Kate is out on a run. Madison is in charge of the case along with her colleagues, middle-aged, dependable Detective Sergeant Kevin Brown and Crime Scene Investigator Amy Sorensen. At first, it seems to be a murder committed by an opportunistic burglar and a ring stolen from the house and pawned provides the evidence against a local man. But then Amy finds other evidence which is worrying: a solitary hair which can be linked to a similar murder seven years before. A man had been convicted for that murder but had committed suicide two years ago. So he couldn’t be responsible for the murder of Matthew Duncan. And it appears that someone has been watching not just the Duncan house but the house which was the scene of the earlier murder. A meticulous search through records brings to light a number of very similar murders; in all cases there have been convictions but is this all just coincidence or are numbers of innocent people in prison for something they didn’t do?

Meanwhile Cameron is moving through the landscape intent on administering his own form of justice, and Madison’s relationship with Quinn is beginning to re-emerge. And someone is watching Kate Duncan.

All this makes for a highly complicated not to say convoluted plot which nonetheless is grippingly told with interesting and complex characters. Recommended.
------
Reviewer: Radmila May
Earlier titles in the Alice Madison series: The Gift of Darkness, The Dark.

V. M. Giambanco was born in Italy and moved to London after my Italian A-levels to do a degree in English & Drama at Goldsmiths. She started working in films as an editor’s apprentice in a 35mm cutting room making tea and sharpening pencils. Since then, over almost twenty years, she has been involved in many UK and US pictures, from small independent projects to large studio productions. Her first book was The Gift of Darkness. Valentina lives in South West London.