‘The Man Who Wanted To Know’ by D.A.Mishani 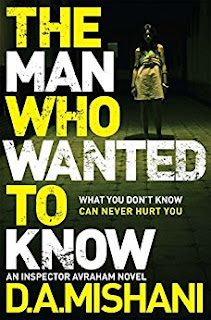 Avraham Avraham lives in Holon, a suburb of Tel Aviv, where he is an inspector with the Israeli Police and has recently taken over as Head of the Investigations Division.  When a former rape victim is murdered, Avraham is called in and embarks on his first murder case since assuming the new role.  He is anxious to find the perpetrator but begins to doubt himself when colleagues and supervisors start to scrutinise and question his methods.  Avraham’s contemplations are complicated by the fact that his Slovenian girlfriend, Marianka, recently left her job as a police officer in Brussels to live with him.  Avraham is concerned that she will regret the move and his worries are exacerbated when Marianka’s parents arrive and express dismay at their daughter’s decision to move to Israel from Europe.

Meanwhile, a parallel narrative, involving another Holon couple, is playing out.  Mali and Kobi Bengtson have been married for several years and share an apartment with their two young children.  Mali is disquieted by her husband’s increasingly erratic behaviour but blames herself for his mood swings which she believes are the result of a traumatic event from the past.  She is fiercely protective of, and deeply in love with, Kobi, and this strength of feeling distorts her perception of events as they unfold.  The novel gathers pace as the two storylines converge and Avraham and Mali begin to reveal their shared human frailties and inconsistencies.

The Man Who Wanted To Know is a tense, intriguing tale that delves into the introspective and tortured psyches of its protagonists.  The author injects the novel with psychological depth by juxtaposing the perspectives of two people who experience the murder enquiry from opposing sides.  As I followed their stories I found myself wondering what I would do in Avraham’s or Mali’s situation and how they would eventually emerge from the emotional labyrinth they had stumbled into.  I thoroughly enjoyed watching their flawed but likeable characters develop and was completely absorbed in a book that emphasises process rather than outcome.
------
Reviewer: Dorothy Marshall Gent

D. A. Mishani  was born in 1975. He is an Israeli crime writer, editor and literary scholar, specializing in the history of detective fiction.  His crime series, featuring police inspector Avraham Avraham, was first published in Hebrew in 2011 and is translated to more than 15 languages. The first novel in the series, The Missing File, was shortlisted in 2013 to the CWA International dagger award.  D. A. Mishani lives with his wife and two children in Tel