‘The Stone Wife’ by Peter Lovesey 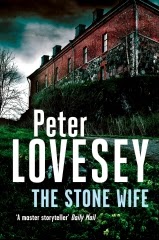 At the Bath auction house things begin to get exciting when the bidding on medieval carving of the Wife of Bath lot 129 attracts high bids.   Whilst the auctioneer takes bids from New York and Tokyo, one man unknown to the regular bidders seems determined to outbid them all. Just as the bidding reaches twenty-four thousand and the prize is within his grasp, three masked armed men enter the auction room and reach for Lot 129.  Incandescent with rage at the thought of the prize being stolen away from him the high bidder remonstrates with the gunman, who fatally shoots him, and then flees empty handed.

As head of the Murder squad and the investigating officer, the Wife of Bath resides in Detective Superintendent Peter Diamond’s office.   Surprisingly, he finds ‘the lump of stone’ makes him uncomfortable and rallies his team to find these masked men in order that he can get the object out if his office.

As his team begin their investigations, Peter Diamond investigates the background to his lump of stone which he discovers is an etching of Chaucer's Wife of Bath. I found the Chaucer information most interesting. Eventually they turn up several suspects who harbour motives of jealousy and revenge. A leading authority on Chaucer, and an ex-tramarital affair. Could the killing have been staged?

There is a second  string when Sergeant Ingeborg Smith, goes undercover using her journalist persona to contact a pop star, but in reality to get close to her boyfriend, a local criminal. I know it’s all part of the story but sometimes these girls take silly risks that no one in their right mind would do. Well I wouldn’t, maybe I am not adventurous enough.

This is the 14 book in the series, and is well-plotted, with that lovely twist at the end that makes mystery fiction so fascinating. Highly recommended.
------
Reviewer: Lizzie Hayes