‘The Indelible Stain’ by Wendy Percival 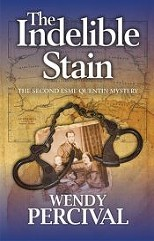 Arriving early in North Devon for her meeting with Ruth Gibson, historical researcher Esme Quentin takes the opportunity of a stroll by the sea in the historic port of Warren Quay.  Her pleasant walk is halted when she finds the broken battered body of a woman at the foot of Warren Cliff.  The woman had clutched in her hand a piece of a torn photograph but the police are not interested in it. Clearly they consider the death an accident from a fall.

When the dead woman is identified as Bella Shaw, Esme learns from Maddy Henderson whom she is helping with research connected to a Convict Ship Museum visit, that  Bella Shaw had commissioned Maddy to restore an old photograph. Esme is troubled by the photograph, and Bella’s final words. So when Bella’s daughter Neave asks Esme to find her father, Esme agrees to do some research.

Her subsequent investigations lead back to the 19th century when convicts were shipped off to Australian, for even the most petty of crimes.  Soon Esme is following the trail of a Devon girl transported for her crime.. But was she guilty?

I became utterly enthralled by this story, as Esme delves back into past records and ships’ logs to unravel the complicated history that she believes led to the murder of Bella Shaw.   The more she uncovers, the more she fears for Neaves, as it becomes clear that much skulduggery had taken place.  As she pieces together the history of two families the legacy of generations of hatred emerges. But her revelations have put her and Neave in danger.

Whilst obviously aware that Britain transported convicts to Australia, I had not realised that it covered a period of 80 years, or that the number amounted to £160,000.  The description of the conditions endured is a harrowing read, but nonetheless most interesting.

This is the second Esme Quentin mystery, and I look forward eagerly to the next, but meanwhile I will hunt out the first. A most fascinating story, with a dramatic conclusion. Highly recommended.
.------
Reviewer: Lizzie Hayes
The first book in the series is Blood Tied 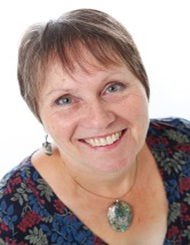 Wendy Percival was born in the West Midlands and grew up in rural Worcestershire. After training as a primary school teacher she moved to North Devon to take up her first teaching post and  remained in teaching for 20 years.  An impulse buy of Writing Magazine prompting her to start writing seriously. She won the magazine's 2002 Summer Ghost Story Competition and had a short story published before focusing on full length fiction.  The time honoured ‘box of old documents’ in the attic stirred her interest in genealogy. When she began researching her Shropshire roots she realised how little most of us know about our family history.  This became the inspiration behind the first Esme Quentin novel, Blood-Tied.
Wendy continues to be intrigued by genealogy, its mysteries and family secrets and writes about this in her family history blog.