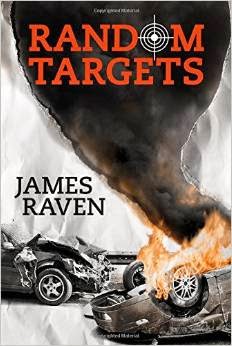 DCI Jeff Temple of the Major Investigations Team and some of his colleagues are having a drink after work, aware of the television reporting a pile up on the M27.  Jeff was reflecting that he glad he lived in the city when his boss Chief Superintendent Mike Beresford telephones him that one of the dead motorists at the crash site has been shot.

The scene is one of utter devastation and it soon becomes clear to Jeff that this is not a one off.  Only a highly trained sniper could have effected the shot.  And there is worse to come, on the next night on another motorway even more are killed. No one knows who he/she is or the motive for such attacks.  But what is clear is that anyone driving on a motorway during the rush hour could be a random target,

Investigation and working with Counter Terrorism Command produces a couple of suspects, but they are all still working in the dark.

This is the first book I have read by James Raven and he certainly knows how to rack up the tension.  I was gripped from the first page and the action never let up.  A thoroughly satisfying read, and one that remains with you. Since reading this book when travelling on a motorway I find myself scanning the bridges – is anyone up there with a grudge.

For a fast paced action thriller this is a must read. Highly recommended.
------
Reviewer: Lizzie Hayes

James Raven has been a journalist for most of his working life. After reporting for local, regional and national newspapers he moved into television as a news scriptwriter. He then worked his way up to become Director of a UK News Division. He now runs his own TV production company. James spends much of his time writing and travelling. He is also an accomplished magician. He is the author of a number of books including After the Execution, Malicious, Rollover, Stark Warning, Urban Myth, Red Blitz and Arctic Blood.