Both these novels feature Spike Sanguinetti, a native Gibraltarian who practises in the colony as a tax lawyer. Spike lives with his father Rufus who is physically frail but mentally highly alert. Spike’s mother is long dead. 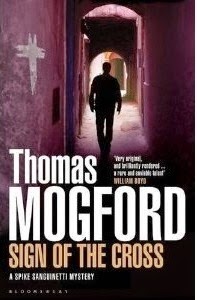 Sign of the Cross is set in Malta. It appears that Spike’s uncle has killed his wife after a brutal sexual attack and then himself. As executor of both their wills Spike travels to Malta to settle their affairs. But he, and his father, are not convinced that his pious, gentle, art historian uncle was responsible for both deaths and that the Maltese police were wrong to close the case. His search leads him through aspects of Malta far removed from the popular tourist sites: sunny beaches, the carnivals and religious festivals, and the prehistoric temples. At the refugee camp where his aunt was a volunteer worker he encounters Zahra now working there as a teacher. She regrets the deaths of Spike’s aunt and uncle but is also concerned at the disappearance from the camp of a young Somali mother and her baby. But it also seems that there are links with the famous painter, Caravaggio, and with the powerful Knights of Malta. Moreover, it is clear that some people do not want Spike to be in Malta and will go to considerable lengths to stop his investigation. And then Zahra disappears . . .

Spike Sanguinetti is a welcome addition to the ranks of action heroes, capable of using both his brain and his fists, tenacious in pursuing his aims, while showing concern for those in need of help. The action is fast and gripping and the on-off relationship with the feisty, independent Zahra adds a certain romantic tension to the series so far although back on Gibraltar is there is also the beautiful police woman Jessica. The sense of place in each novel - Gibraltar, Morocco, Malta - is powerfully evoked; one wonders on which Mediterranean islands Spike will find himself in future novels. Recommended especially for thriller readers. 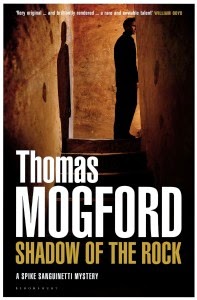 In Shadow of the Rock Spike is asked for help by an old school acquaintance, Solomon Hassan, who is on the run from the police in Tangier where he is suspected of the murder of a young Spanish woman, Esperanza. As a tax lawyer with no knowledge of criminal or extradition law, Spike is at first reluctant to be involved but when Solomon’s mother demands that Spike assist her son; as a Jew, she says that he will not have a fair trial in Morocco. So Spike agrees to represent Solomon at the extradition hearing in Tangier. Solomon is an accountant with the giant energy firm Dunetech which specialises in solar energy from the desert sun; the murdered girl was the stepdaughter of his boss. Spike’s search to find out more about Esperanza and her last evening leads him to a squalid nightclub; he learns that she had a quarrel with a young Bedouin woman Zahra. Zahra is at first hostile to Spike but when he rescues her from being not-so-accidentally run down she is prepared to help him although she is more interested in finding out what has happened to her father who disappeared several years ago after a dispute with Dunetech. Together, facing violence and danger, they seek the truth through the sordid slums of Tangier and the arid desert sands.
------
Reviewer: Radmila May 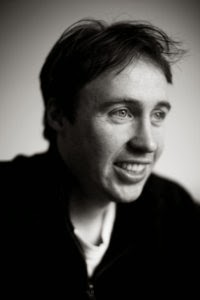 Thomas Mogford  has worked as a journalist for 'Time Out' and as a translator for the European Parliament and UEFA Champions League. While studying to be a lawyer, he looked into practising abroad. Instead, he decided to write a series of thrillers set around the Mediterranean. "Shadow of the Rock" introduces Spike Sanguinetti, a lawyer from Gibraltar who is willing to risk everything to protect his client. It was shortlisted for the 2013 New Blood Dagger Award for best new crime writer. The third novel in the series, Hollow Mountain, will be published in April 2014.