‘Death by Duck’ by John Wilson 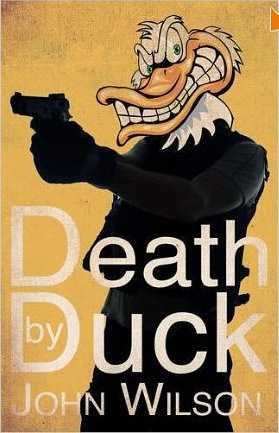 The dean stands over the body of a ex-student, who he knows was killed by a person wearing a duck mask.   When his secretary walks in he is standing over the dead body, gun in hand.  He then runs and the body has disappeared by the time the police get there.

This is a really unusual story about Dean Ansari, not a killer but a frightened fugitive who runs as far away as he can.   Without knowing why someone has been killed and confused by the fact that no paper has reported his escape from justice he leaves the country that he knows well and transplants himself to India and beyond.    What happens as he travels is that his experiences widen and he meets a variety of interesting and sometimes unsavoury characters.

This is not really a book about the murder, though it is the thread that runs through the story.  Mostly, it is about a man finding out about the world and his own resourcefulness in the face of adversity.   He is followed by a resourceful policeman who is nicely painted as someone who believes in the Dean’s innocence, but is determined to follow him anyway.

Really interesting book, with characters who are deliberately larger than life and caricatures to carry the story forward in a funny and eccentric way.  For me there are some elements of charm which so carried the No 1 Ladies Detective Agency novels into the hearts of the public.  Quirky and fun to read with some outright laughs at the antics of the Dean and his naivety.
------
Reviewer: Amanda Brown

John Wilson was involved in legal education for over 35 years in various capacities. He currently lives with his wife in Greenbrae, California, and has three children.