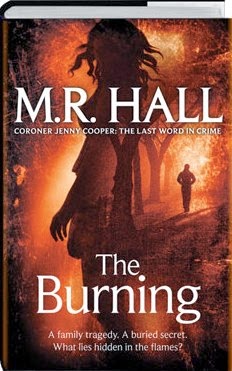 Published by Mantle, 2014.
ISBN: 978-0-230-75204-7
In the tiny Shropshire village of Blackstone Ley, in bitter winter weather, three people die in a house fire: Ed Morgan, part-time abattoir worker, and his two stepdaughters, Layla (13) and Mandy (11). The post mortem establishes that all three actually died of gunshot wounds. The mother, Tracy, was away from home at the time and her and Morgan’s three-year-old son, Robbie, is missing. Morgan himself is the most likely suspect, the damaging evidence against him is that he had sent a vituperative message to Tracy on his mobile, saying that Robbie would never be found. It will be Coroner Jenny Cooper’s duty to inquire into the deaths and to establish if she can, the truth. People who knew Morgan say that it would have been completely out of character but the police are eager to close the file. But Jenny is not altogether convinced: Tracy’s previous boyfriend, Darren Brooks, is a possibility; or there could be a link between Robbie’s disappearance and that of little Susie Ashton ten years before; or between the fact that Layla was pregnant at the time of her death and had got in with a wild crowd of youngsters.

At the same time, Jenny is investigating the death of civil servant Daniel Burden, apparently a suicide, that is, until Jenny is approached by Liverpool solicitor Louis Falco one of whose clients, Jakob Rozek,  has disappeared, possibly murdered, but who before his disappearance had called Burden on his mobile. Is there a connection between Rozek’s disappearance and the abattoir/rendering plant where Morgan worked and if so could Robbie’s body been disposed of there? In her investigation Jenny is assisted by Detective Inspector Gabriel Ryan and her former police assistant, Alison Trent, but the latter is still recovering from a brain injury and that has affected her judgment. Meanwhile, there is also the presence of Jenny’s lover, the charming but erratic Michael Sherman to contend with.

This is the seventh in the Jenny Cooper mysteries and is a really good read. The author was previously a barrister at the criminal Bar and his advocacy skills are admirably demonstrated in the two hearings in the coroner’s court which are compelling and authentic. Highly recommended.
-------
Reviewer: Radmila May

M.R.Hall  was born in London in 1967, he was educated at Hereford Cathedral School and Worcester College, Oxford, where he graduated in law. During a career at the Bar, working mostly in the field of criminal law, he tried to learn the craft of screen writing, eventually getting his first commission in television writing an episode of the ITV hit series, Kavanagh QC starring John Thaw. He went on to write further episodes and shortly afterwards was commissioned to create a series for the new Channel Five, Wing And A Prayer. The first season earned him a BAFTA nomination in the best series category. For over ten years Matthew has been a screen writer and producer, and has written over forty hours of prime time drama for BBC1 and ITV.  His debut novel, The Coroner, was published by Pan Macmillan in the UK in 2009 and was nominated for the Crime Writer’s Association Gold Dagger in the best novel category. The second novel in the Jenny Cooper series, The Disappeared, was published in the USA by Simon and Schuster on December 1st 2009 and in the UK by Pan Macmillan in January 2010. The third novel in the same series, The Redeemed, was published in April 2011 in the UK and May 2011 in the USA. The fourth in the series, The Flight was published in the UK on 2 February 2012.  He lives and works in the Wye valley in South Wales.