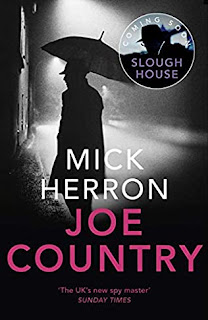 There is not one world in spy fiction, there are several. There is the rarefied environment of the novels of the late John le Carre with their quiet, intellectual spies. There is the tawdry glamorous braggadocio of James Bond. And there is the chaotic world of spydom depicted by Mick Herron in his Spook Street series with on the one hand MI5 based in Regents Park (the ‘Park’) where all the top flight spies are to be found, and on the other the decrepit Slough House near the Barbican where all those deemed unsatisfactory for one reason or another by the Park are exiled to perform the most tedious of tasks (Slough House - Slow Horses, the title of the first book in the series). High up in the Park is Lady Di Taverner, as establishment a figure as one might guess from her title, but also a ruthless schemer with connections to various personalities of considerable political importance. And running Slough House is the toad-ugly Jackson Lamb, obese, bullying, with personal habits so disgusting as to be a threat to public health, all of which disguises his crafty abilities and, for all the way in which he abuses and jeers at his ‘joes’, his loyalty to those joes. It is down to Lamb and his coterie of social misfits, most of whom are people with whom in real life one would not want to share an office, that the series has become so popular.

The story begins, after an introduction which is in fact a flash-forward, with a number of events setting off several parallel but linked narratives. There is the search for Lucas Harper, teenage son of the dead slow horse, Min Harper, who had been the lover of another slow horse, Louisa Guy; Lucas has disappeared, his mother is frantic to know where he has got to and pressurises Louisa into searching for him. So why has Lucas gone on the run and who is pursuing him?

Slow horse River Cartwright, grandson of the recently deceased David Cartwright, once a power behind the throne in MI5, is pursuing Frank Harkness, former CIA operative, now a renegade freelance operator accompanied by a trio of hitmen.  Alec (Lec) Wicinski has been exiled to Slough House after child pornography was found on his laptop despite his insistence that he hadn’t put it there, insisting someone else must have done so. But why? And how is it that he is found upside down in a rubbish-filled wheelie bin outside Slough House with the initials PAEDO slashed into his cheeks? Can he, or the obnoxious computer genius Roddy Ho with whom Lech shares an office, track down what this is all about?

Many of the characters who appear in the previous Slough House stories reappear here, four of whom find themselves in snowbound Wales: Emma Flyte, once of the Met, now at the Park, when threatened by Lady Di with exile to Slough House has flounced out and now, unemployed, is offered the job of tracing the errant Lucas; she is accompanied by the silent psychopath, J K Coe; Louisa herself, anxious to know how the search for Lucas is progressing; and River who finds that his search for Frank Harkness is entwined with that for Lucas. But not all Slough House operatives who find themselves out in the field (‘joe country’) return; the casualty rate can be quite high. This time, will any of the foursome fall by the wayside? And if so who? But Jackson Lamb, whatever his character defects, is loyal to his joes; anyone who messes with them had better watch out.

The narrative structure of this novel is very complicated with switches from one character to another in a series of episodes, brief but clearly completely controlled by the author. The black humour for which the author is celebrated is very much there, but I sensed a feeling of despair as well; some good people triumph but the overall mood is bleak.

There is some beautiful writing (the author began his writing life as a poet) which can be gruesome – at the beginning there is an unforgettable description of a flaming owl trying to escape a barn which has been set on fire. Not all the issues raised in this book are solved; no doubt, the next one will continue those stories while introducing others into the world of Jackson Lamb and his slow horses. Recommended.
------
Reviewer: Radmila May

Mick Herron was born in Newcastle upon Tyne, but now lives in Oxford, and works in London. His short fiction regularly appears in Ellery Queen's Mystery Magazine, and he is a contributing editor to the monthly book trade publication Bookdealer. He has two series. In the Slough series there are seven books and, in the Oxford, there are five.

Radmila May was born in the U.S. but has lived in the U.K. since she was seven apart from seven years in The Hague. She read law at university but did not go into practice. Instead she worked for many years for a firm of law publishers and still does occasional work for them including taking part in a substantial revision and updating of her late husband’s legal practitioners’ work on Criminal Evidence published late 2015. She has also contributed short stories with a distinctly criminal flavour to two of the Oxford Stories anthologies published by Oxpens Press – a third story is to be published shortly in another Oxford Stories anthology – and is now concentrating on her own writing.
Posted by Lizzie at 13:35