‘The Devil and the Dark Water’ by Stuart Turton 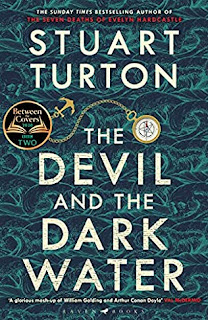 I very much enjoyed Stuart Turton’s debut The Seven Deaths of Evelyn Hardcastle, hailed as near genius, and looked forward to discovering the delights of his second novel.

The author says he wanted to write something totally different and certainly to get away from the country house murder scenario of Seven Deaths, and he couldn’t have worked harder to achieve this aim. The novel is mainly set aboard an Indiaman – a merchant ship – taking a cargo of valuable spices from Batavia, what is now Indonesia, to Amsterdam in1634. That aspect is based on fact, with the super-rich United East India Company operating the trade route. The voyage took eight months and with a lack of navigational aids was a risky undertaking. Add the risks of pirates, storms and disease and many didn’t survive. The author tells us this at the outset so we have some basis for the adventure on which he takes us, and I clung to it like a shipwrecked passenger clings to driftwood as the story opened. The novel like the journey is a significant undertaking, running to nearly 550 pages, and it took many chapters before I felt fully engrossed. There are a lot of characters, just as with Seven Deaths, most of them with Dutch names, adding an extra complication for the English reader’s memory, and with unfamiliar roles on board ship, so another layer to absorb. However, a major plus of all this is the setting and the atmosphere which are so rich and all-encompassing that once one has grasped the major points and understood the major characters it makes for a rewarding read.

The devil element takes on overriding importance as it seems a devil called Old Tom, hunted across Europe by the late witchfinder husband of a major character, is attempting to take over the ship, recruiting crew, officers and passengers alike to its cause with promises of great wealth in return for small favours, such as murder. The devil is ostensibly aided by a more corporeal leper, who apparently died in strange circumstances on the dockside as everyone embarked, but has ignored this inconvenient fact to pop up in all sorts of places in the extensive and well-described ship to haunt, threaten, warn and even kill our characters.

Chief among these are Arent Hayes and Sara Wessel, both related to the hated governor general at whose behest this voyage takes place. We root strongly for them as individuals – especially given the strange tragedy in Arent’s past – and as a couple when they fall for each other against the odds. We also root for Sara’s clever daughter Lia and for her friend Creesjie Jens, her detested husband’s mistress, and for Arent’s friend and partner-in-solving-crimes Sammy Pipps, currently a mistreated prisoner. I did find the strangeness of everything – the characters, the ship, the situation, the culture and the supernatural element – quite difficult to assimilate, but by the second half of the novel these had become familiar and I wanted to read on. By the time of the key murder, so many other peculiar things had happened that it perhaps didn’t have the impact it might, as it was a locked room mystery, yet after that the pace picked up, there seemed more cohesion between the individual strands and the story unfolded in a satisfying way. In fact, it did became much more Agatha Christie-like, despite the very alien setting as its cast of characters took turns to present themselves as possible murderers and mayhem-mongers. The third person, multiple viewpoint structure made this possible.

The solution was genius and payback for the endeavour involved in reading The Devil and the Dark Water. It was an exciting adventure, taking us far away from now in every sense, and providing an intriguing mystery in a setting that had dark hints of Treasure Island but with so much more.
------
Reviewer: Dea Parkin 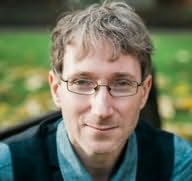 Stuart Turton is a freelance travel journalist who has previously worked in Shanghai and Dubai. The Seven Deaths of Evelyn Hardcastle was his debut novel. He is the winner of the Brighton and Hove Short Story Prize and was longlisted for the BBC Radio 4 Opening Lines competition. He lives in London with his wife.

Dea Parkin  is an editor with her consultancy Fiction Feedback and is also Secretary of the Crime Writers’ Association. She writes poetry and occasionally re-engages with The Novel. When she isn't editing, managing or writing she is usually to be found on the tennis court – or following the international tour at home on TV. Usually with several books on the go, she entertains a penchant for crime fiction, history, and novels with a mystical edge. She is engaged in a continual struggle to find space for bookshelves and time for her friends and her cat.