‘Murder in Chianti’ by Camilla Trinchieri 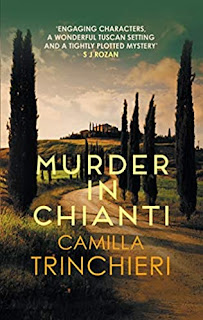 Following the death of his Italian wife, Rita, NYPD homicide detective Nico Doyle decides to move back to Gravigna, Rita’s childhood home in Tuscany. Gravigna is a composite, medieval town complete with castle walls, towers and a church with a steeple, surrounded by the rolling Chianti hill and land blanketed by rows of neat vines. From a rented farmhouse on the edge of town Nico slowly begins to rebuild his life. Rita’s family, her sister Tilde, husband Enzo and their daughter Stella welcome him with open arms as he helps them in their restaurant, goes running, tends his vegetable patch and becomes acquainted with the people who run the bar, the newsstand, the bakers, the flower shop etc.

Then their peaceful lives are shattered. A single gunshot followed by the sound of a dog yelping leads Nico to the body of a man whose face had been obliterated by being shot at very close range. The carabinieri are alerted and the local maresciallo, (an army ranking possibly somewhere between a sergeant and an inspector in England) Salvatore Perillo, arrives.  Salvatore and his youthful assistant Daniele tackle the investigation in a very humane way. To begin with Nico doesn’t tell the carabinieri about his own background, but it’s not long before they’re all working together to discover the identity of the dead man, why he was killed and who killed him.

The victim is identified as Robert Garrett, a former citizen of the area who has lived in America for the last twenty years. He has also made his fortune there. It seems Garrett has returned to Italy to locate the unborn daughter he believes he left behand. But who is she? There is a choice of two girls, Rosalba Crisani, with whom Daniele immediately falls madly in love, and Nico’s niece Stella whose boyfriend Gianni is very possessive.  Garrett had a connection with both of their mother’s before he left Italy. He believes he knows which of the girls is his daughter, but is he right, and does his search for a daughter have anything to do with his murder anyway?

Garrett was known to many in Gravigna, and there are probably other old scores to be settled, including one with Nico’s landlord, Aldo, whose land he was shot on. His sister, Maria Dorsetti, still lives in the area.  Did she kill him or have him killed to get her hands on his money? Or was it the relatives of the two girls who have killed him to protect the young girls and their mother’s reputation? It is likely that some of the older inhabitants - including one who is a little bit simple but still manages to quote apposite phrases from Dante - know more than they are letting on, but in keeping with old custom they keep their ideas to themselves.

Murder in Chianti is a book that evokes the charm and minutiae of Italian life so beautifully that you could almost be there. There is much cooking, eating and drinking of coffee and other beverages. The pace of life is definitely not fast, and neither is that of the book, but the story moves along steadily. The characters – with the possible exception of the stray dog Nico adopts who is more human and intelligent than most of the other characters put together but is so loveable that I readily accepted him – are authentic. A stormy relationship between Stella and her boyfriend Gianni and the hint of the reawakening of Nico’s emotions by an attractive artist called Nelli, provide romance. All in all, an engaging mystery with a shadowy underside.  I would love to hear more of Nico and his Italian friends, both two-legged and four-legged.
------
Reviewer Angela Crowther 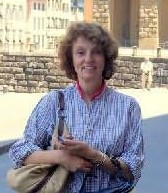 Camilla Trinchieri was born in Prague to an Italian diplomat father and American mother and came to the United States at age twelve. After graduating from Barnard College, she moved to Italy. She returned to New York City in 1980 and earned an MFA in writing from Columbia University. As Trella Crespi and Camilla Crespi she has published seven mystery novels.

Angela Crowther   is a retired scientist.  She has published many scientific papers but, as yet, no crime fiction.  In her spare time Angela belongs to a Handbell Ringing group, goes country dancing and enjoys listening to music, particularly the operas of Verdi and Wagner.