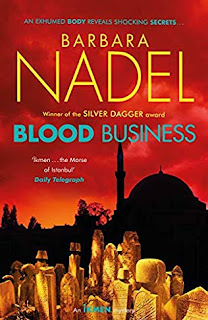 The blood business which gives this latest instalment in the writer’s prize-winning series its title is the business of illegal organ transplants, mainly eyes and kidneys but sometimes organs yet more vital to life. Given the extent of the poverty among Istanbul’s residents, fuelled by substantial drug addiction, and the millions of refugees from the never-ending Syrian wars, there is no shortage of potential donors, willing and not so willing.

The story begins with the night time exhumation from Istanbul’s largest cemetery of the body of an old woman, Periham Hanim, who had died five years previously, the reason for the exhumation being a bitter dispute between her two sons, Ugur and Lokman Bulut, arising from her disposition of her not inconsiderable property consisting of an impressive house in an upmarket district of Istanbul and a highly prosperous pastry business. All that had gone to the oldest son, Ugur, who is a successful and hardworking businessman; the wastrel younger son has made do with what he could extract from his mother in the past and what he now extracts from his brother or borrows from dubious sources. But Lokman wants it all and now he has hit on a way of ousting his brother by insisting that he is his mother’s legitimate heir and that Ugur, who does not resemble either Perihan or Lokman, must be illegitimate. He demands that his mother’s body be exhumed, and her DNA be tested against that of Ugur.

But when the body in Perihan’s grave is exhumed, the body that is found is that of someone else, also an old woman but very recently deceased whose heart has been cut out by a skilled surgeon. The aristocratic Inspector Mehmet Suleyman, of Ottoman descent, no less, is in charge of investigating this very serious crime. Whose body is this? And where is Perihan’s body? The cemetery is haunted at night by homeless people and by teenagers looking for somewhere quiet to take drugs but in as much as the police can track them down, they all claim to have seen nothing, heard nothing, know nothing, and the same is true of the various cemetery attendants and guards.

But the now-retired Inspector Ikmen has a different quest involving a group of four people, two men and two women, themselves like Ikmen no longer young but who had previously been well-known as the Moral Maze. They had supported the failed attempted coup of 2016 which had led to a spell in the Silivri prison for them and the ruin of their careers. Now one of the men makes machines which have no function at all and could best be described as art objects (consequently he is known as Machine Bey) and the other, once a jeweller and still known as Gold Bey, makes punk jewellery out of old mobile phones etc and computer components for young people who like to look a bit edgy. One of the women had been a highly successful dress designer but now has to eke out a living at knockdown prices; the other had been a famous and successful actress in Turkish films. Now, because of the part that all four played in the failed coup, they have to operate as much as they can under the radar without attracting the attention of the vengeful Turkish state authorities. And now the Actress as she is known has been missing for several weeks and Ikmen has undertaken to find her. But could her body be the body in Perihan’s grave?

This tangle falls to be investigated by Ikmen and Suleyman, sometimes separately, at other times together. It leads them into very dark and dangerous places with characters who are as ruthless and careless of human life as it is possible to be. It provides a mosaic-like picture of the complex and vibrant life of the fascinating city of Istanbul with its varying ethnic, cultural and religious groups. Recommended.
------
Reviewer: Radmila May 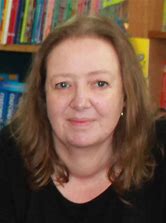 Barbara Nadel was born in the East End of London. She trained as an actress and used to work in mental health services. She now writes full time and has been a visitor to Turkey for over twenty years. She received the Crime Writers' Association Silver Dagger for her novel Deadly Web. She has written 22 books in her series about Çetin İkmen, a chain-smoking and hard-drinking detective on the Istanbul police force, and his colleagues Mehmet Süleyman. Her second crime series, set in West Ham in the East End of London, during The Blitz, features undertaker Francis Hancock.