‘One by One’ by Helen Bridgett 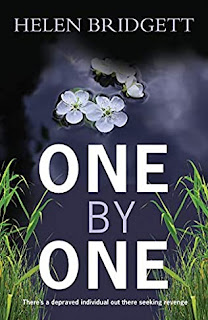 Maxie Reddick is a professor of Criminology at the University of Lonsdale who also does a podcast with local journalist, Craig Johnston. She teaches criminology as an academic subject, detached from the reality of what has actually happened. But when she is contacted by a fellow employee of the university, Rachel, who lets rooms in her house to students, she comes up against a particularly horrifying reality. One of Rachel’s lodgers, a quiet, studious, rather religious, girl called Georgina Pickering, had attended a wedding at a grand venue, Stanmer Hall; as the celebrations get noisier and more drunken, Georgina, not finding this at all to her taste, decides to leave early and walk through the beautiful grounds. And there she is brutally attacked and raped by a stranger who uses her pashmina to cover her face so she cannot see who her assailant is. She does her best to resist him, but he is much stronger than her and her efforts are unavailing. When he has finished with the assault, he then photographs her which adds to the horror. She is too traumatised to go to the police; the only person in whom she feels she can confide is her landlady Rachel who, desperately anxious about Georgina’s physical and mental health, contacts Maxie. Can she help?

Maxie contacts DS Andrew Dawson who had been the university police liaison officer but is now back in the force, but she knows that if the victim is not prepared to come forward there is little chance of making progress. The same is true of Dawson’s boss, Chief Inspector Heather McAllister. Eventually, after Maxie uses her psychological skills to help Georgina deal with her trauma so that she does seem to be prepared after all to go to the police, something dreadful happens, and the rape enquiry turns into a murder hunt. And at the same time, Maxie’s husband who has become unemployed has his own problems and their marriage which had been precarious for some time is now falling apart while their son Karl is taking his A-levels and trying to decide what he wants to do with his life. And the unnamed rapist/murderer is watching what’s going on.

I found this story really fascinating. Maxie’s psychological skills which she uses both to help Georgina and to try and analyse the mind of the rapist/murderer are highly interesting in themselves and cast a timely light on how sexual offences, so frequently committed and so rarely brought to a satisfactory conclusion, could be more fully investigated.  I did wonder about Lonsdale University; it does appear to be fictitious (nothing wrong with that, happens all the time in fiction) but is it based on Lonsdale College which is part of Lancaster University or is it entirely imaginary and situated somewhere in the constituency of Westmoreland and Lonsdale which straddles part of Cumbria and Lancashire? I would like to think it’s the latter because I have spent a number of holidays in the remote and beautiful area near Sedbergh. Either way this is a very enjoyable story, and I am looking forward to more in this series. Recommended.
-------
Reviewer: Radmila May 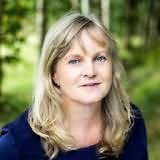 Helen Bridgett was born in North-East England and now lives in Manchester having stopped off at a few places in between. Having failed miserably with every New Year's resolution that involved diets, one year, she set herself a completely different goal - to write a novel and give it as a Christmas present. And so, The Mercury Travel Club was born, and the characters took on a life of their own. Outside of writing. Having written one, she couldn't stop! Helen is currently developing the next novels in The Mercury Travel Club series. Then, in 2020 a new set of characters took up the main stage in Serenity Bay - a fictional village on the glorious Northumberland coast. 2021 sees the publication of Helen's debut crime novel featuring Professor Maxie Reddick. One by One published 26 January by Ruby Fiction. Outside of writingHelen loves hiking and banter with friends..