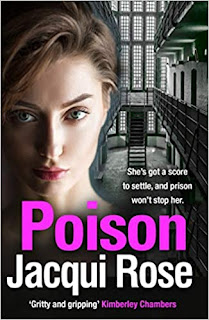 
A hard-boiled page-turner where all the characters are criminals – even, it turns out, the policeman who’s trying to put one of them away for good.

This is a novel that’s obviously part of a series and I did wish I’d read the previous book. In this, a murder took place for which the pivotal character, Franny, is in prison on remand, plotting revenge on Vaughn, the guy who grassed. However, enough was revealed for me to get quickly up to speed, and it certainly didn’t prevent me from enjoying Poison – it just made me want to read the forerunner. There were plenty of plotlines running in parallel, and the one that engaged me most concerned a young ex-heroin addict called Shannon. She was looking after Mia, the baby of the woman who was murdered in the previous book and is thrilled to be offered a roof over her head by Vaughn, the guy who put Franny in prison. Shannon is a naïve teen and has no confidence or self-esteem – easy prey for her appalling long-term abuser and uncle, Charlie. The predicament she gets herself in makes her aim of persuading the much older Vaughn to see her as a potential lover almost impossible.

Meanwhile, the copper who is determined to bring down Franny, Detective Balantyne, also has problems with his wife, Emma. He’s desperate to get rid of her; she’s an alcoholic and a threat to his career – and therefore his goal to put Franny away permanently. Then there’s a terrible accident that plays into his hands… More fascinating situations are set up and the plotline with Balantyne escalates. Add to the toxic mix Mr Huang, a ruthless gangster who seems to have the upper hand against Vaughn and his friend Alfie – little Mia’s father and ex-partner of Franny – and every kind of hell can and does break loose.

This sounds like it might be hard to follow but the prose is clear, the story fast-moving and the pace blistering. The characters are sufficiently well drawn to pull in the reader and follow, with dropped jaw, the action as it races to a climax. Yet many threads are left, enticingly dangling, provoking hope of another novel to follow.
------
Reviewer: Dea Parkin

Jacqui Rose  is a novelist who hails from South Yorkshire. Jacqui first came to appreciate the power of the written word when as a child she charged her classmates a packet of sherbet dips to write their essays for them. Adopted at a young age and always a daydreamer, she felt isolated growing up in a small mining village in South Yorkshire and it was her writing which kept her company.

Dea Parkin is an editor with her consultancy Fiction Feedback and is also Secretary of the Crime Writers’ Association. She writes poetry and occasionally re-engages with The Novel. When she isn't editing, managing or writing she is usually to be found on the tennis court – or following the international tour at home on TV. Usually with several books on the go, she entertains a penchant for crime fiction, history, and novels with a mystical edge. She is engaged in a continual struggle to find space for bookshelves and time for her friends and her cat.
Posted by Lizzie at 15:32