The Last Resort by Susi Holliday 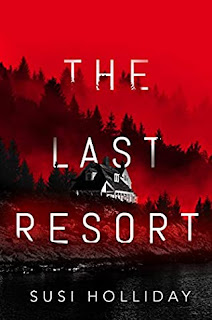 Seven people, four women and three men are lured to accept a luxury, all expenses paid, break at an unknown destination.  They are not allowed to discuss their invitations with one another -or with us – so nobody knows why anybody has been invited.  They have been promised payment and a party at the end of the day, but as some of them, like the hedge-fund manager Brenda are well-heeled, one assumes that curiosity, greed and large egos must all have played a part in them accepting their invitations.

They are flown to a small island where six of them are fitted with small, over-the-ear contraptions that function as memory mining devices. These cannot be removed and are used by unseen organizers to select memories of the dreadful things – fraudulently stealing a young relative’s money, burning an ex-husband and his family alive in their house etc., that the various guests have done. Their deeds are broadcast to the rest of the group in graphic video clips so there is no escaping their shame. One of the guests is subjected to the humiliating experience of seeing their beloved boyfriend enjoying a threesome with two other ladies. Some of them also suffer horrific accidents, like being bitten by a poisonous snake, as they explore the island.  The action occurs over a single day: by the end of it, rather than having had a relaxing and enjoyable luxury experience, the participants are physically and mentally broken.

The seventh participant, charity worker, Amelia, is treated differently from the start. She is fitted with a less invasive wrist device and assumes the role of peacemaker and helper. She is never forced to face up to or confess her worst deed and, as the day proceeds, it gradually dawns on her that the whole event revolves around her.  In a prelude we are told about two children aged around ten years old. They didn’t know each other but spend an unforgettable few hours together.  One of the children insists they adopt nicknames, George and Anne like the characters in Enid Blyton’s Famous Five.  Anne is clearly Amelia. George’s identity is revealed later. Every so often we’re given little insights into vague memories Amelia has of the island and the day she and George spent together twenty years ago -the day Anne believes she pushed a man to his death on the rocks.

Amelia’s story, and how she then resolves the problem she is presented with, are admirably explained at the end. I never did understand why the other six were chosen.  For all I know it may have been to test the neural pathway programmes of the uniquely powerful memory retrieval devices the participants were fitted with, or to help emphasize the island throw-back to Agatha Christie, or it might even have been a gentle nod towards Melmoth, Sarah Perry’s remarkable treatise about everything that is important in life. But as you will discover, it doesn’t really matter that much.  Anyone who likes horribly creepy books that are half SciFi, and half psychological thrillers will love The Last Resort.
------
Reviewer Angela Crowther.

Susi Holliday grew up in East Lothian. A life-long fan of crime and horror, her short stories have been published in various places and she was shortlisted for the inaugural CWA Margery Allingham competition.  She has written three crime novels set in the fictional Scottish town of Banktoun, which are a mix of police procedural and psychological thriller. Susi also works as a pharmaceutical statistician. She is married and lives in London, and you will find her at crime fiction events in the UK and abroad.

Angela Crowther  is a retired scientist.  She has published many scientific papers but, as yet no crime fiction.  In her spare time Angela belongs to a Handbell Ringing group, goes country dancing and enjoys listening to music, particularly the operas of Verdi and Wagner.