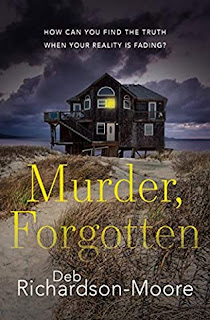 Julianna Burke, the popular mystery writer, is visiting her Scottish holiday home with her assistant, Margot.  She and her doctor think that it might be good for her to get away for a while as she is struggling to come to terms with the violent death of her husband, Connor, and also trying to cope with confusion and memory loss, which often results in her forgetting that he is dead.

Logan, her daughter, has visited her a few times since the murder, coming back to the childhood home, the ‘Moby Dick of a house’ on the South Carolina coast.  During these visits she has become closer to her mother and, in her absence, (apart from taking care of Julianna’s Shiba Inu dog, Annette) she learns more about her mother’s life, her friends and neighbours and her sources of inspiration for the stories.  As she is looking around the house, she is thrilled to find the unfinished manuscript of Julianna’s most recent book, but other discoveries force her to consider the possibility that her mother may have murdered her much-loved husband of 20 years.

When Margot and Julianna return from Scotland sooner than expected, Logan decides to stay with her mother for a while.  As she learns more about the murder and the police inquiries and discovers long-hidden secrets that raise uncomfortable questions, doubts and suspicions, she begins to wonder if she had ever really known the people around her mother.  Then there is a second death.

The book is in three parts, the chapters of which alternate between Julianna and Logan and move the story forward effectively.  The change of scene between Scotland and South Carolina work well and the relationships between the different characters (nice and nasty) add layers to the central story.  Logan and her mother have the opportunity to develop their own relationship, but the concerns about Julianna’s memory issues are always hovering.  Though there are clues along the way and a number of suspects, the author manages to sustain the suspense and sense of danger.

Other books by this author:  this is a stand-alone, but the author has written a series, The Branigan Power Mystery series.
------
Reviewer: Jo Hesslewood

Deb Richardson-Moore  was a reporter for "The Greenville (SC) News," for 27 years, winning three national writing awards and routine recognition from the South Carolina Press Association. She then took over the religion beat at "The News" and enrolled in a nearby seminary to learn more about it. Her life was never the same. She left the newspaper and earned a Master of Divinity degree. Because jobs for clergywomen were scarce in her own Baptist denomination, she accepted a job as pastor of the non-denominational Triune Mercy Center, a crumbling, inner-city mission church to the homeless.