‘The Good Priest’ by Tina Beattie 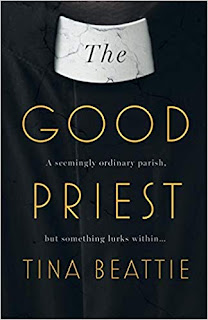 On Ash Wednesday at the beginning of Lent and the run-up to Easter, Father John Patterson is hearing the confessions of his parishioners. They are a very ordinary cross-selection of parishioners in any Catholic parish: two nuns (one a dementia sufferer), Jane pregnant with a sixth child which neither she nor her husband can afford, his deacon widowed after many years of marriage admitting to masturbation, Luke, a beautiful young homosexual whom John himself desires although, true to his vows of celibacy, he barely admits this to himself, Holly, outwardly brash but inwardly despairingly furious over the death of her young daughter Sarah in an accident. But then there’s someone else, a voice which is horribly familiar to John although he cannot at first remember who, a voice which confesses, not to an evil act but to an intention to carry out an evil act and which refuses to admit to any remorse and so cannot receive absolution.

Later on, the unknown man returns to the confessional and taunts John. And now John recognises the voice from his time in Rome, when as part of his training for the priesthood he was seduced by a cardinal, a cardinal who subsequently disappeared amid rumours of a sex scandal and was rumoured to have resurfaced in New York and to have died in the attack on the Twin Towers on September 11, 2001. Is it the same man? Did he really die?

Meanwhile the killings have started – are these the intended evil acts? The first victims are prostitutes, many of them victims of sex-trafficking, but then others follow. Because of his prior knowledge Father John feels that he must try and warn women who are potentially at risk but the media, ever-ready to sniff out possible clerical abuse, are on to him and after the media the police. And because Father John is bound by the seal of the confessional, he cannot tell anyone of the mysterious confessions he has heard – and whoever heard of a dead man confessing? Father John is a good man, who demands much more of himself than of his parishioners, and he is desperate to know which way to turn.

This is an interesting and intellectually demanding read by a leading Catholic theologian although I am not sure how much it will be of interest to anyone except those interested in the more arcane aspects of Catholic theology. But for those who are I do recommend it.
------
Reviewer: Radmila May

Tina Beattie was born in 1955 in Lusaka, Zambia. Her parents were economic migrants from post-war Scotland. She is married to Dave and they have four adult children, with proliferating numbers of grandchildren. Tina divides her time between Bristol and London, where she lives on a houseboat on the Thames. Tina is Professor of Catholic Studies at the University of Roehampton, and Director of Catherine of Siena College based at Roehampton. In addition to her academic publications, she has written several popular books and is a frequent contributor to the media, including Radio 4's Thought for the Day. Her novel The Good Priest was published in March 2019.