‘In Safe Hands’ by J.P Carter 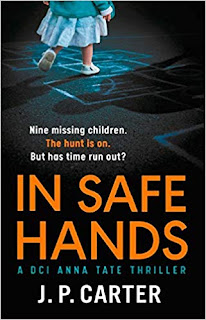 To be the senior officer charged with finding nine vulnerable toddlers aged between three and five-years old who’ve been abducted from their nursery school would be horrendously stressful under any circumstances.  But for DCI Anna Tate the task is almost unbearably poignant. She is still searching for her own daughter, Chloe, who has been missing for ten years after being snatched by Anna’s ex-husband when she was only three-years old.

The gun-wielding men who have taken the children are dangerous and not open to negotiation.  They seriously injured Tasha Norris - one of the nursery school’s teachers – during the abduction and threaten to kill the children if their ransom demand for a six million pounds isn’t met in full on the date and time specified.  All the parents are desperate, but none more so than Ruth and Ethan Brady.  Their son, Liam, has Cystic Fibrosis and could die if deprived of his medicine and regular physiotherapy.

The clock ticks down relentlessly as DCI Tate and DI Max Walker along with every available policeman and all the relevant specialist units in London pool their resources as they try to discover who has taken the children. The abduction process ran like clockwork, so Anna believes the men who took the children must have had inside information, either from the staff or the parents.

Sarah Ramsey, the glamorous blond who owns the nursery, is up to her eyes in debt following adverse publicity about a little girl who died at another of Sarah’s nurseries.  The girl’s father, Jonas Plat, has vowed to make Sarah suffer and is an obvious suspect.  Anna thinks Sarah is either withholding information or lying to them – she is, but does it matter?  Ben Wilson, the divorced father of one of the children gives them the runaround.  The behaviour of Ruth and Ethan Brady also gives pause for thought.

As they try to build a picture of who might have taken the children, and find where they are being hidden, small pieces of information accumulate slowly.  In the midst of all this, Anna receives a message from a dying man who purports to have information that may help her to find her daughter.  Anna visits him in a hospice but has to delegate the follow up to a private detective whilst she concentrates her all attention on finding the toddlers before the deadline is reached.

In Safe Hands is a book that you have to finish, and preferably as soon after you start it as possible.  It is a tense and fast-moving story that grips you from the word go.  Anna is a warm and sympathetic character who thoroughly deserves her caring partner Tom, though whether she will ever allow him to move in with her is another matter. I will certainly read the next books in the series to see how Anna’s search for her own daughter progresses.
-----
Reviewer Angela Crowther

J. P. Carter is the pseudonym of a bestselling author who has also written sixteen books under the names Jaime and James Raven. Before becoming a full-time writer, he spent a career in journalism as a newspaper reporter and television producer. He was, for a number of years, director of a major UK news division and co-owned a TV production company. He now splits his time between homes in Hampshire and Spain. 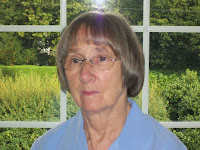