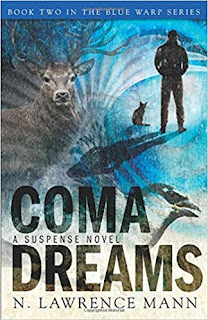 Look, up in the sky...it's a bird...it's a plane...it's a mixed-genre novel! That was my reaction as I came to terms with this second book in the author's Blue Warp series. There is mystery here, several in fact, but also a psychological thriller, science fiction and fantasy. All shaken AND stirred by the fertile imagination of N. Lawrence Mann.

Told from the points-of-view of twelve humans and two animals (one of them a texting cat!), 'Coma Dreams' offers entree into a world where an addict, a serial killer, a therapist, a law student and his girlfriend (who's joined via ESP to the addict) take off on a cross-America dash to save retired Colonel Brett Stafford from arrest by the police of multiple jurisdictions.

Col. Stafford has been in a coma for six months when he's awakened by Brennan Reynolds. This young man has learned that his addiction to the drug Glow has given him extraordinary powers, including the ability to heal. He uses his "tingling hands" to revive Col. Stafford but soon finds that's not all he's roused. Another entity, confused and violent, inhabits and controls the colonel, leaving mayhem and murder wherever it goes.

Mann creates alternative realities which are believable and drive the story forward. Col. Stafford and Talvi, who has somehow been awakened inside his body, both want to return to the Blue World which nurtured them while they were each in a coma. Thanks to Glow, Brennan has also visited the Blue World and is almost lost in that beguiling realm as he tries to help two souls whose blissful existence he inadvertently disrupted.

Although this book is the second in a series, it does stand alone. However, the back story from the first would probably make some aspects of the second more coherent and satisfying.

Like all good thrillers, this story is action-driven, although the author offers insights into the main characters' histories, needs and goals. Mann does a good job of sustaining the pace, especially toward the end, when most of the story's threads come together. The Epilogue makes clear that there's lots more to the Blue Warp series, with just enough loose ends to make the reader want to find out what happens next.
------
Reviewer: Nancy Swing

N. Lawrence Mann is an American author. His works are largely described as suspenseful, but frequently incorporate components of fantasy, science fiction, and humor. His novel, Full Breach, was the first in The Blue Warp series, released in 2017. A native of Michigan, Mann was born in Detroit and spent his formative years in Kalamazoo. Years later, his family moved to Phoenix Arizona where he attended high school. Mann became an indefatigable reader and writer at an early age. In fact, he received his first recognition as a writer in kindergarten, winning a young author's contest. Although this was not the defining moment for deciding on a career as a writer, it did impact his subconscious. After spending many years as a songwriter and creating soundtracks for independent films, Mann returned to school studying film, media and small business at Arizona State University. While this gave him the credentials for a professional career in those fields, his desire to create proved, yet again, too powerful to ignore. He felt the time was appropriate to turn dreams into goals, and goals into stories. N. Lawrence Mann currently lives in Boston and often commutes to Los Angeles.

Nancy Swing wins 5-star reviews for mysteries with twisty plots, unconventional characters and engaging settings. Each book is the fruit of her unusual life journey, stretching from the hills of West Virginia through the deserts of Somalia and the jungles of Laos to the olive groves of Italy. Now retired from international consulting, she's turned her hand to writing and lives with her husband, nonfiction author Russell Sunshine, on California's Central Coast.