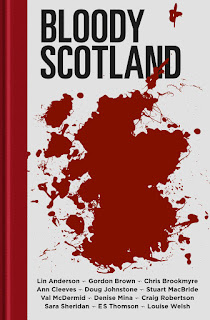 An anthology of short stories is a wonderful way of discovering previously unfamiliar authors, as well as of enjoying work by favourite writers. But an anthology which is merely a random collection of stories may lack a distinctive character. The best anthologies have a personality of their own. Bloody Scotland is an excellent example of a themed anthology with just such a personality; the book focuses on the sinister side of Scotland’s built heritage. In his introduction, publisher James Crawford explains that the idea for the project came to him during the Edinburgh International Book Festival, when he posed the question: “What if we asked twelve of Scotland’s top crime writers to write short stories inspired by twelve of our iconic buildings? What would they think? What would they come up with? What could possibly go wrong?” This seems to me a brilliant idea, and Crawford’s imaginative concept has been brought to life by a dozen writers, one of whom, Ann Cleeves, is no doubt to be treated as an honorary Scot thanks to the success of her books set on Shetland.

A note at the end of the book says that Historic Environment Scotland is, through its books “exploring ideas and starting conversations about the past, present and future of our nation’s history and heritage”. It’s a worthy aim, and Bloody Scotland exemplifies how to put it into practice successfully. Each author has taken a particular landmark and woven a crime story around it – so, for instance, Doug Johnstone tackles the Forth Bridge and Chris Brookmyre Bothwell Castle. Ann Cleeves’ excellent The Return is set at Mousa Broch, while Val McDermid’s equally enjoyable and Edgar-nominated Ancient and Modern is set around the Hermit’s Castle at Achmelvich. Denise Mina’s CWA Dagger-winning Nemo Me Impune Lacessit – an extremely chilling story, by the way - is set at Edinburgh Castle, which happens to be one of the few buildings featured in this book that I’ve visited. Suffice to say that the quality of the stories is high, and that there is an added bonus – now, I also want to discover all the sites that are unfamiliar to me. I imagine that many readers will feel the same, and this is a tribute to James Crawford’s vision as well as to the contributors. Strongly recommended.
------
Reviewer: Martin Edwards