‘Mercy or Mercenary’ by Sheila Parker 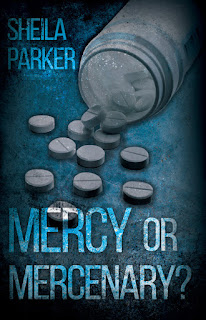 Writer Ralph McGuire, whilst virtually bed-ridden as a result of Alzheimer’s disease, is nevertheless working on the biography of a flamboyant and well-known actor, Leo Adare.  Ralph’s condition makes him reliant upon various carers, overseen by his wife Isabel, and including his niece Joanna.  Whilst this small team assist him with his physical needs, Isabel, a writer in her own right, and family friend Duncan Sinclair provide McGuire with the professional support required to ensure that the Adare project is completed.

When a mysterious man, purporting to be a friend of the biographer, arrives at the McGuire home, Joanna, is alone in the house with her uncle.  He persuades Joanna to allow him upstairs for a brief discussion with the biographer.  After ten or so minutes the visitor emerges from her uncle’s room and, as he leaves the house, tells Joanna that Ralph wants to rest and not be disturbed.  She complies, but when she next checks on her uncle, he appears to be unconscious.  She panics not knowing what to do next – then Isabel comes home and is appalled to discover that her husband is not just unconscious but dead!  She summons Ralph’s doctor who confirms death; he then checks the bathroom cabinet for his patient’s medication but finds only an empty bottle.  He suspects that Ralph has died of an overdose, but who gave him the pills and why?  He calls the police at once.

Detective Inspector Kershaw and his sergeant Tom Small are assigned to the investigation but immediately find themselves with more questions than answers.  Who was the unexpected, and apparently unknown, friend who visited McGuire just prior to his death?  Moreover, whilst the anonymous caller is the obvious suspect, Joanna is the only person to have seen him.  Could she be lying?  And then, whoever administered the medication, what motivated the act?  Did the perpetrator intend to relieve Ralph of his suffering or was he, or she, hoping to hasten their acquisition of an expected inheritance?  The situation facing the detectives is further complicated when other members of the household are themselves threatened by a stranger who appears to be able to appear and disappear at will.  Kershaw and Small must move quickly to find the killer but are confronted by an ever-increasing array of suspects!

Mercy or Mercenary successfully employs flash-backs to increase tension within the narrative and as the list of suspects grows Kershaw and Small, along with the reader, are kept on their toes! The book is fast-moving with twists and turns galore.  The moral dilemma posed by euthanasia and assisted dying is an underlying theme within the novel, but it does not detract from the who-done-it puzzle that the detectives must solve.  An enjoyable read.
------
Reviewer: Dorothy Marshall-Gent

Sheila Parker was born in Guernsey and spent the war years evacuated to Bristol until the island was liberated in 1945, when she returned. Now a retired hotelier, she still enjoys meeting new people and hearing their stories.