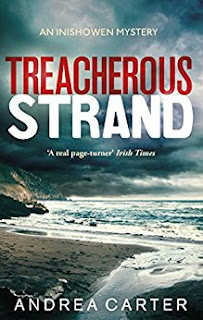 Treacherous Strand is the second book in the series featuring Solicitor Benedicta 'Ben' O'Keeffe.  I see that I said in my review of the first book, Death at Whitewater Church. ‘This one of the most intriguing mysteries I have read in a long time.’  And delightfully nothing has altered this author’s ability to weave a fascinating mystery.

The news of the discovery of a woman’s body on a beach in the Inishowen peninsula has Ben in a panic to learn the identity of the victim.  When she does she is overcome with remorse. Marguerite Etienne was her client and for the second time in her life Ben has let someone down.

After a brief investigation the local police Sergeant Tom Molloy records Marguerite's death as a suicide.  But Ben cannot let it go at that.  Although her initial investigation shows Marguerite to have been a quiet woman with no friends she is determined to find out the truth behind her death.

Spurred on by the casual and indifferent way the people that Ben speak to have reacted to  Marguerite’s death Ben digs deeper and discovers that she had been brought up in a French Doomsday cult - The Children of Damascus.  The unexpected delivery into Ben’s hands of some overlooked possessions of Marguerite’s discloses that she had escaped the cult some 20 years earlier leaving behind her baby daughter.

Despite discovering many odd coincidences and connections, nothing makes sense, but Ben doggedly continues to question anyone who had contact with Marguerite.  This brings her into contact with Simon Howard, the sculptor who lives in the cottage next to Marguerite, and whom she said was a friend. But when Simon begins to pay Ben attention she is not certain that she can trust him. The one person she does trust is Sergeant Tom Molloy, but what had been for several years a good working relationship had changed nine months ago and Ben had no idea why, but was surprised at how much she cared about that.

As Ben continues to investigate Marguerite’s life she finds there are people that could have a motive to kill Marguerite to keep their secrets just that – secret, and so the possible suspects mount up.

I loved this clever and ingeniously plotted book, but then I love a good mystery. And this intriguing mystery gripped me from start to finish.  Most highly recommended.
------
Reviewer: Lizzie Sirett 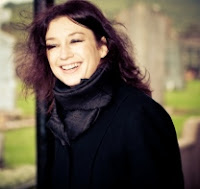 Andrea Carter is a barrister living in Dublin. She grew up in Ballyfin, Co Laois.  She graduated in law from Trinity College, Dublin in 1991 and qualified as a solicitor, setting up her own practice on the Inishowen peninsula in Donegal in 1998. In 2005 she transferred to the bar and moved to Dublin to practise as a barrister.
In 2011 she was a finalist in the Irish Times Power’s Whiskey Short Story Competition and her short story, What Maisie Did, was published in Celebrating What Really Matters - Powers Whiskey Short Story Collection. Death at Whitewater Church was the first in the series featuring Solicitor Benedicta 'Ben' O'Keeffe

https://cartercrimewriter.wordpress.com
Posted by Lizzie at 08:26