‘The Pledge’ by Friedrich Durrenmatt 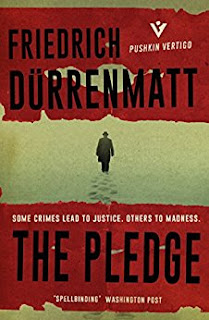 There are some books you discover that defy reviewing.  Books that are so well written that you simply want to put up a big notice which says This novel is brilliant. Read it. However, as it behoves the reviewer to offer more than six words, here goes…

I first encountered Freidrich Durrenmatt at university, studying his plays and those of fellow Swiss dramatist Max Frisch and the mighty Bertolt Brecht.  All three were recognised as the mid 20th century leaders of European drama. Durrenmatt for his intelligence and insight, Frisch for his brilliance and originality, and Brecht for his epic theatre and hisde-construction of ‘the well-made play’.

At the moment the three men met in 1947, no one realised that Durrenmatt was about to de-construct the crime thriller.

His reputation as an avant garde dramatist, a writer of macabre satire with an ability to fuse comedy and tragedy was huge.  But not content with confining himself to the theatre, he side-slipped into crime novels, writing four – The Judge And His Hangman (1950), Suspicion (1951), The Pledge (1958), and The Execution Of Justice (1985) – all of which will be re-published by Pushkin Vertigo. The Pledge  is the first into bookshops.

Durrenmatt maintained detective novels should reflect the absurdity of real life, rather than proceeding in a logical process towards a definite solution.

Subtitled with supreme confidence Requiem For The Detective Novel  the story reflects Durrenmatt’s ingrained dislike for formulaic plot construction.  Written in the first person, it essentially has two narrators.  A writer who begins the book, then a Police Chief who takes over, as the two men – who have only just met – drive home to Zurich together, following a lecture the writer has given on the art of constructing detective stories.

The Police Chief begins by laying down his opinion…  What really bothers me is you set up your stories like a chess game; here’s the criminal, there’s the victim, here’s an accomplice; and all the detective need to know is the rules. He replays the moves of the game, and checkmate, the criminal is caught and justice has triumphed. This drives me crazy. You can’t come to grips with reality by logic alone.

The majority of the story, as told by the Police Chief, is written as one long speech. There are no interruptions from the writer as he simply listens throughout the car journey.

A young girl, Gritli Moser, is found brutally murdered in a Swiss mountain forest.  The investigation is handed to the Police Chief’s most brilliant detective, Inspector Matthai, who cannot accept the solution he finds.  Not even when a local felon is arrested.  Not even after the man has confessed.  He has a long conversation with Doctor Locher, the head of a psychiatric clinic, showing him a drawing made by Gritli – the Hedgehog Giant – shortly before she was murdered.  When asked by her school teacher what the drawing was supposed to represent, Gritli simply said a giant she met in the woods gave her little hedgehogs.

Matthai refuses to accept Dr Locher’s rationalisation, gets nowhere with his police colleagues, and promises the girl’s mother he will stop at nothing to find the killer- the real killer. Unable to do so, he leaves the police force and buys himself a rundown petrol station on the edge of town, all the while pondering on the case he hasn’t solved. From here, his life falls to pieces.

Years later, the Police Chief returns to the case at the request of a priest who has someone he wants the detective to meet.  And there is, of course, a decidedly un-neat conclusion to the narrative, which the Police Chief hands over to the writer to exploit as he wishes…
”And now, my dear sir, you can do what you want with this story.”

Freidrich Durrenmatt, who died in 1990, was a literary master. His writing was absurd, comic, macabre, tragic and brilliant. This reviewer for one is delighted to have access to his work once more.
------
Reviewer: Jeff Dowson.

Friedrich Durrenmatt (1921-1990) was best known as the author of clever, morally inquisitive plays such as 'The Visit' and 'The Physicists.' In the early 1950s he also wrote three short, spellbinding mystery novels, which the University of Chicago Press has reissued in paperback with new translations from the German by Joel Agee: The Pledge and The Inspector Barlach Mysteries: The Judge and His Hangman &Suspicion. The latter includes a thoughtful foreword by Sven Birkerts, who praises Durrenmatt's talent as a captivating entertainer who could also 'play through complex moral issues with a speed-chess decisiveness and inexorability.'