‘Day of Reckoning’ by Keith Wainman 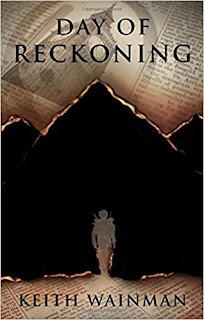 Kamal Salah is an influential member of the Muslim Brotherhood.  Forced to leave Cairo in 1954, he and his family eventually seek refuge in Canada where his sons Anwar and Mohamed thrive in their chosen professions.  In 1962 Mohamed seizes an opportunity to purchase a large farm in Montana.  He leaves Canada, becomes an American citizen, and presently marries a catholic woman, Kathleen Bush.  Mohamed, known as Mo, takes his wife’s surname following their wedding thus becoming even more fully integrated within American society.  The couple have three sons, the two eldest follow in their father’s footsteps and become farmers, whilst Nathan, the youngest son, joins the U.S. marines.  Nathan’s decision was made partly because he had been thrilled with his maternal grandfather’s stories about wartime exploits fighting in the Pacific, and partly because, when he was sixteen, he had enjoyed visiting the Middle East with his paternal grandfather, Kamal, and the experience had left him with a desire to travel the world.
So far, so good - the American Dream seems to be alive and well.

However, whilst serving in Iraq, Nathan is shocked by an event he witnesses and begins to question the validity of U.S. intervention there.  He leaves the Marines with an honourable discharge but harbours feelings of resentment towards America, particularly its foreign policy towards the Middle East.  These emotions are excacerbated when he subsequently takes another trip to Egypt with his grandfather.  There he meets Kamal’s old friends from the Brotherhood and realigns with his familial roots, feeling more at home within the Egyptian community than he did in the U.S.  He gradually progresses from aid worker to terrorist as he rejects his old life in America, to embrace what he believes to be his destiny amongst a small band of brothers who are committed to jihad.
The author skillfully juxtaposes present day narrative alongside Nathan’s backstory, and the reader is able to see how the young man’s radical views develop and eventually lead to his involvement in terrorism.  The story is told through a third person narrator but mainly from Nathan’s perspective, thus presenting some of the complexities and tensions that children of immigrant Middle Eastern parents living in the West might feel.  Whilst the tale offers a salutory reminder that one person’s suicide bomber is another person’s martyr, the narrative at no point becomes an apology for acts of terror.  By chilling coincidence, the novel was reviewed just after the dreadful terrorist attack on Westminster in March, a fact that made the events in the tale even more relevant and shocking.

Day of Reckoning is a frighteningly plausible story which explores how ancient feuds reach into modern conflicts with devastating consequences.
------
Reviewer: Dorothy Marshall-Gent

Keith Wainman was born and brought up in Central London, one of seven children. He has worked in several jobs and has run his own business. He enjoys watching sport and keeping up with current affairs. Keith has previously published Public Face Private Vice (Matador 2015) and Why was She Killed (Matador 2014).