‘The Ides’ by Peter Tonkin 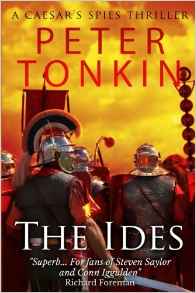 The reader is plunged into this historical tale of treachery and murder just as Artemidorus, a legionnaire turned spy, is in the act of freeing a young female slave, Puella Africana, from the household of Lord Brutus.  It is 44 BC, Artemidorus works for a small network of spies loyal to Caesar, whilst Puella has information that will provide evidence of an assassination plot - evidence that must reach Caesar’s allies quickly if they are to avert an attempted coup.  The soldier and the slave are pursued through the dangerous streets of Rome by Brutus’ unsavoury doorkeeper, his vicious dog and two muscular slaves.  Hampered by torrential rain, they survive several close calls before they reach safety at the home of Spurinna, soothsayer to the ill-fated Gaius Julius Caesar.  Their relief is short-lived.  Outside Spurinna’s house Artemidorus makes a gruesome find that prefigures the gory murder of Rome’s dictator,  just as the augur foretold.

In the aftermath of Caesar’s assassination the Roman Republic looks certain to descend into  political and social chaos.  Artemidorus, Mark Anthony, Enobarbus and others loyal to the dead ruler and their country, must move swiftly to bring the murderers to justice and restore stability.  Within this raging ocean of hate, fear and butchery, are a few bitter-sweet drops of tenderness as Cleopatra seductively complicates the lives of Caesar and Anthony, and Artemidorus strives to safeguard his lover, the beautiful spy Cyanea.

Skillfully woven into the high speed plot are meticulous descriptions of Ancient Rome, its alleyways and buildings, people and customs.  Similarly, the text is subtly peppered with Latin vocabulary in a way that is informative and interesting without feeling overly didactic.  Tonkin’s sentences are often truncated, jarring against each other.  This technique suits the breathless pace of the story and replicates the physical battering of hand to hand combat that is all in a day’s work for Artemidorus as he strides from one pitched battle to another.

The Ides is a testosterone-fuelled battle roar in a world of double-dealing and betrayal, where wits must be sharp and recovery time between violent encounters is brief.  Peter Tonkin has infused a familiar narrative with excitement, energy and a delicious twist right at the very end.
------
Reviewer: Dorothy Marshall-Gent