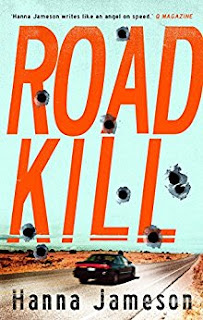 The opening scene of Road Kill sets the tone for this novel as it describes a character ingesting a mixture of MDMA and vodka.  Whilst you don’t need to research the substance to enjoy the book, Google reveals that:
“ethylenedioxy-methamphetamine (MDMA) is a synthetic drug…”, that induces, “feelings of increased energy, pleasure, emotional warmth, and distorted sensory and time perception.” This illuminating definition describes the book rather well.

Through the stories told by two first person narrators, Daisy and Ronnie, the reader becomes immersed in the frenetic subculture of drug dealing and gangsters.  Daisy works at The Underground, a London nightclub, which is managed by Noel and Ronnie.  Noel’s alcoholism and drug-addiction render him unreliable for much of the novel, whilst Ronnie has returned to his homeland, America, to support his brother Eamonn whose prison sentence for murder is about to end.  Edie, the nightclub’s owner, becomes increasingly disenchanted with the two managers and she promotes Daisy during their absence.  The plot thus follows events in London through Daisy’s perspective whilst Ronnie’s American adventure plays out away from home.  The dual setting is intentionally disorientating and reflects life in the twilight zone within which the storytellers operate.

Shortly after Eamonn’s release, Ronnie abandons his fraternal duties and is persuaded to accompany his friend Eli on a road trip through the States.  The purpose of the journey is to track down an elusive business associate called Trent, who apparently cheated Eli during a deal.  The events that follow are fantastical in the extreme, as the men encounter a variety of extraordinary characters, experience distortions of place and time, and find their senses numbed or heightened through a series of real and drug induced trips.  Killing and mayhem are routine occurrences as the two companions confront, and sometimes participate in, the dark arts of alchemy and satanic ritual.

Across the Atlantic, meanwhile, Daisy is haunted by another evanescent being, curiously known as, Seven.  As the novel progresses, Daisy becomes obsessed with finding her erstwhile pal, but finds it impossible to distinguish reality from imagination in her crazy, drug-fuelled and sleep-deprived life.

These parallel, transatlantic plots eventually come together and a dramatic, violent conclusion is inevitable. Jameson describes a chaotic world that terrifies and tantalises.  She creates unstable and dangerous characters who, at times, reveal themselves to be astonishingly ordinary and, therefore, all the more frightening.  This is, perhaps, unsurprising for an author who cites Tarantino as one of her influences.

Anyone who enjoys the surrealism of David Lynch and M. Night Shyamalan will find “pleasure and emotional warmth” within the dark humour at the centre of the novel.  Road Kill is enjoyably gruesome noir!

Road Kill is Hanna Jameson’s third novel in the London Underground series.  She was shortlisted for the CWA John Creasey Dagger Award 2013 for her debut novel Something You Are and  Girl Seven the second novel in the series published by Head of Zeus.
------
Reviewer: Dorothy Marshall-Gent

Hanna Jameson published her first novel, Something You Are, when she was just twenty-one. It was nominated for a CWA Dagger. She has lived in Australia and travelled the USA, Japan and Europe.