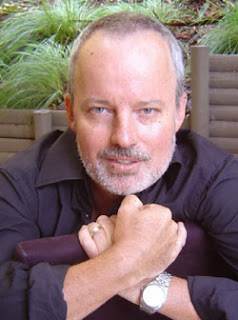 Michael Robotham was born in Australia in November 1960. He grew up in small country towns but escaped in 1979 and became a cadet journalist on an afternoon newspaper in Sydney. For the next fourteen years he wrote for newspapers and magazines in Australia, Britain and America. As a senior feature writer for the UK’s Mail on Sunday he was among the first people to view the letters and diaries of Czar Nicholas II and his wife Empress Alexandra, unearthed in the Moscow State Archives in 1991. He also gained access to Stalin’s Hitler files, which had been missing for nearly fifty years. In 1993 he quit journalism to become a ghostwriter, collaborating with politicians, pop stars, psychologists, adventurers and show business personalities to write their autobiographies. Michael now lives in Sydney.

Lizzie: Michael it’s a great pleasure to meet you. When I looked back at the reviews I have done of your books, over the years,  I see I had written such sentences as ‘One of the best books I have read this year’. ‘What great plots!’ So let’s talk about your ninth book Watching You, could you tell us about the background to this book and where the idea came from?
Michael: Like most of my novels Watching You is seeded in a real life event, but I can’t give too many details because it would give some of the plot twists away. What I can say is that it involves a story I had to cover as a journalist when a UK paper sent me back to Sydney to write about a woman who claimed she was being stalked. The police initially thought she was being paranoid and then they thought she was being haunted by a past
tragedy, but the truth proved even more shocking and disturbing.

Lizzie: Professor Joseph O'Loughlin was introduced in your first book, The Suspect, and has appeared in six out of the nine books you have written.  Is he based on one person, pure imagination, your alter ego, or an amalgam of many people you have met?
Michael:  Of all my characters, Joe is probably closest to me in terms of age, politics and outlook. We’re both in love, we both have daughters, we both wonder if we’re being good fathers. Joe is far braver and cleverer than I am, with an astonishing ability to understand human behaviour.

I was very privileged to work with some amazing forensic psychologists in my career as a journalist. My knowledge of criminal behaviour, such as it was, is based upon their expertise.

Lizzie: In your second book The Drowning Man (aka Lost) you introduced Vincent Ruiz, who has appeared in two further books, can you tell us from where he originated?
Michael: Vincent is actually the only character to have appeared in every one of the nine novels – either as a major or a minor character. On paper he’s almost a cliché – the hard drinking, three times married, world-weary ex-detective, but there is a reason for men like him become clichéd. They exist. Throughout my career as ajournalist, I met a lot of detectives and Vincent is an amalgam of many of them.

Lizzie:  Your third book The Night Ferry, features detective Alisha Barba.  So were you planning writing stand-alone books, and did the decision to re-introduce Joseph O'Loughlin come when you started writing Shatter?
Michael: I didn’t intend to write a series. When I introduced Joe O’Loughlin in The Suspect, I thought he would be a one-book wonder and I’d move on to a new character. My publishers were keen for me to do a series so eventually I compromised. I created a cast of characters. Vincent Ruiz starred in the The Drowning Man and Alisha Barba in The Night Ferry.

I only brought Joe back again in Shatter because it was the perfect story for a psychologist to tell – the tale of two men pitted against each other – one who takes pleasure in breaking minds and mentally destroying his
victims, and the other who has spent his career repairing damaged minds.


And I only brought Joe O’Loughlin back in Bleed for Me because my wife insisted she wouldn’t sleep with me again unless I sorted out Joe’s personal life. (I’m still trying…and I’m still married.)

Lizzie: You worked as a journalist for twelve years on a variety of papers in Australia, Britain and America.  Having read your books it is clear that you are a gifted storyteller. What prompted you to become a Ghostwriter?
Michael: I wanted to be a writer since my early teens, but growing up in a small outback town in NSW, I felt as though I had nothing to write about. Journalism was the first step in my education because it took me all around the world. As time went on all the confidence and bravado of youth began to evaporate. What was I thinking? What made me think I could write? Ghostwriting taught me that I had the patience to spend a year working on a single project – as well as the ability to capture a character and make them live and breathe, just like the real life subjects I worked with.

Lizzie: Although you live in Australia, many of the setting for your books are the UK and Europe. Is this a conscious decision, or does the story dictate the setting for you?
Michael: I lived in London for a dozen years, working as a journalist and ghostwriter. During this time I wrote a novel set in a small fishing village in Australia. It was almost published by Penguin almost 25 years ago, but missed out by a single vote in the final publishing meeting. I was told afterwards that if I had set this novel in England,Ireland, Scotland or Wales they would published it in a heartbeat, but a first novel set in Australia, was just a little too hard to sell. This comment stayed with me and when I sat down to write The Suspect I decided to set the story in London and to see what happened. That part manuscript became the subject of a bidding war at the London Book Fair in 2002. The rest, as they say, is history.

Lizzie: Are the ideas for your books sparked by real events and people, or do ideas just come to you? Or a mixture of both?
Michael: All my books are seeded in real life events (I don’t use the word ‘inspired’ because a real life crime shouldn’t inspire anyone). I wish I was the sort of writer who had a drawer full of idea that I could dip into, but each time I finish a book I’m convinced that I’ll never write again. Every clever line has been used up, every description, every twist. Then a few hours later, I’ll think of something else. I don’t know where it comes from – I’m just glad it does.

Lizzie: Professor Joseph O'Loughlin has Parkinson’s disease.  What was the thinking behind that?
Michael: As I mentioned earlier, I had no intention of writing a series. I thought Joe O’Loughlin would only appear in one book. I gave him early onset Parkinson’s Disease because I liked the idea of a hero with a brilliant mind but a crumbling body, someone who had to out-think his foes because he was never going to be a Jason Bourne of Jack Reacher.

Lizzie: Do you plan your plots before you start writing?  And, if so, do your books change during the writing process, or do they pan out exactly as you originally planned?
Michael: I’m a pantser not a plotter. I come up with a premise and characters and I let the story unfold. At some point I think of an ending and then spend the rest of the book doubting if I can get there. Sometimes I do. Sometimes I think of a better ending. For me it’s an exciting, energetic, almost organic way of writing. It’s like being a trapeze artist working without a net. Sometimes you swing out and let go, tumbling through the air, hoping there’s something swinging towards you to cling on to. On a good day, you’ll grip the bar and keep going. On a bad day, you’ll crash and burn.

Lizzie: When embarking on a new book, what area of the book challenges you the most?
Michael: I hate plotting. I know this is a strange confession for a thriller writer, but I much prefer writing back story and dialogue and characters. The twists and turns of plot make my head ache.

Lizzie: Do you have a favourite part of the writing process?
Michael: Creating characters that live and breathe in my imagination. I love exploring the dynamics of relationships, within families or friendships or marriages.

Lizzie: Lastly and most importantly – what are you currently working on? A new Joseph O'Loughlin, Vince Ruiz, or a stand-alone, or a new series?
Michael: I’m working on a stand-alone, something very different. Called Life and Death, it’s a thriller set in the deep south of America about a man who serves a long prison sentence but escapes from jail the day before he’s due to be released.