‘The Beauty of Murder’ by A K Benedict 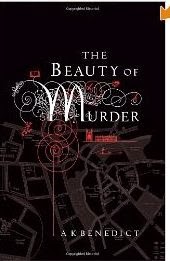 Discovering a body of a murdered girl, who went missing a year before, Stephen Killigan is drawn into a weird web of murder in Cambridge and it is complicated by some strange anomalies.  A second body is found, a boy who went missing the night before, but the body seems to have been dead for over a year.  Stephen has to find out what is going on before he is charged for murder or possibly killed himself.  The policewoman on the case, D.I. Jane Horne wants to believe him but evidence seems to continue to point to him, and her own life and health keep interfering in her enquiry.

This is a really complex novel with twists and turns and finely tuned characters, some strange, some quite normal, and some historical.  The backdrop of the city of Cambridge and the surrounding countryside plays its part in fleshing out a tale of murder, psychosis and time travel.   The plot flashes between the current day and past times, with characters who morph and trick their way through its intricacies.  The police are typically dumbfounded by a set of murders that don't seem to make sense and Stephen fumbles his way to finding out the truth, exposing the black past of his college and discovering a sinister individual whose past and present overlap with dark consequences.

A well written and intricate novel with some interesting and unusual facets.   The protagonist Stephen Killigan  is at times, not always a likeable character, but against the challenges and danger you find yourself working with him to unravel the various strands of the story.  Not an easy read as it requires concentration but a fascinating and worthwhile narrative, beautifully written around the backdrop of Cambridge current and historic.
------
Reviewer: Amanda Brown

A K Benedict  was born in 1979. She read English at Cambridge and studied creative writing at Sussex. She now composes film and television soundtracks, as well as performing as a musician. She lives in Hastings and writes in a room filled with teapots and the severed head of a ventriloquist’s dummy

www.akbenedict.com
Posted by Lizzie at 14:44