‘The Age of Doubt’ by Andrea Camilleri 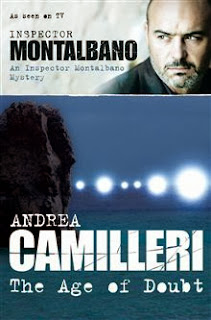 In a heavy rainstorm, Inspector Salvatore Montalbano of the Sicilian police rescues a young woman whose car is about to plunge into the sea. Since she seems to have nowhere to go, he takes her to his house for the night. Her name, she says, is Vanna Digiulio, she is a student living in Palermo, and she is supposed to be meeting her aunt in the afternoon of the next day on the latter’s boat - called The Vanna - when it gets to the harbour at Vigata. In the morning Montalbano takes her to the police station at Vigata and tells her she can wait there until The Vanna (real name The Havana) gets to Vigata. However, when The Havana does arrive the Harbour Police call Montalbano to say that there is the body of a man on board which the crew of The Havana had found in a dinghy while coming into port. Montalbano, inspecting the body, sees that the face has been smashed making facial identification impossible. And The Havana’s rich and glamorous, but short-tempered and sexually rapacious owner, Livia Giovannini, first denies having any knowledge of a niece called Vanna and then admits, somewhat unconvincingly, that she came and then left. But Montalbano’s further enquiries elicit that Vanna never went on board The Havana, and that whoever she was she was not Vanna Digiulio, the real one having died in Iraq some years ago. Montalbano is puzzled and suspicious about The Havana, her owner and her crew, particularly since the false Vanna seems to have known quite a lot about them all. Is The Havana at the centre of some criminal activity - if so, what? Who really is the false Vanna Digiulio? And why does the beautiful Lieutenant Laura Belladonna of the Harbour Police, to whom Montalbano is attracted, behave so erratically?

As with all the Montalbano stories, there are numerous twists and turns before Montalbano can solve the twin mysteries of The Havana and the false Vanna Digiulio. Extra confusion arises from Montalbano’s sudden and overwhelming infatuation with Laura Belladonna, exacerbated by the coolness shown to him by his own long-term and far-distant girlfriend. Montalbano’s constant good-tempered bickering with his colleagues provide an entertaining background, while the social lies he finds himself making to a particularly irritating colleagues who is convinced, despite Montalbano’s protestations to the contrary, that he has a wife and  children, are genuinely amusing. And Montalbano’s frequent forays to his favourite restaurant are most enticing - any chance of recipes? No wonder the TV BBC4 series is so popular.
--------
Reviewer: Radmila May
Other books by the author include The Potter’s Field, The Patience of The Spider, and The Voice of the Violin.

Andrea Camilleri is one of Italy’s most famous contemporary writers. The Inspector Montalbano series has been translated into thirty-two languages and was adapted for Italian television, screened on BBC4. The Potter’s Field, the thirteenth book in the series, was awarded the Crime Writers’ Association’s International Dagger for the best crime novel translated into English. He lives in Rome.