‘A Little Murder’ by Suzette Hill 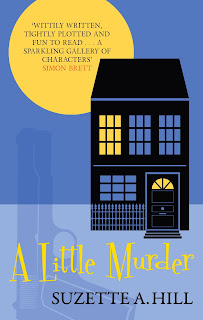 When Marcia Beasley is discovered in her home at St John's Wood, naked and with a coal scuttle on her head, it unsettles many people, not least her niece Rosy Gilchrist, who along with all the members of Marcia’s social circle, is eager to distance herself from her aunt's fate and raffish reputation. Detective Sergeant Greenleaf is tasked with solving the crime, but makes little progress.

Despite her reluctance, Rosy, finds herself drawn into the intrigue that surrounds Marcia’s death.  Acting in good faith she agrees to help a friend with the result that she comes into information she would have preferred not to have known.  From this small favour she finds herself cross examined by Felix who provides beautiful blooms, and his friend the acidic Cedric, all done, of course,  in the best possible taste, with fino sherry.  The artist Clovis Thistlehyde, awful Vera who seems to beset her at every turn, and the Fawcetts  all seem determined to uncover what she knows, But what does she know!  As Rosy constantly explains to people who keep popping out of the woodwork to interrogate her, I may have known her as a child but with the war we went our separate ways. However, through various unwanted conversations Rosy learns that her aunt’s life during the war was a colourful one!  As more information comes to light Rosy muses that her aunt’s demise could be an act of revenge.

Set in the early 1950’s, this is a delightful romp, as Rosy is pulled form her quiet ordered existence into the murky world it appeared that her aunt had inhabited.  A further death has everyone twitchy and looking over their shoulder’s, particularly those who have been indulging in a little wickedness!  Highly recommended.
-----
Reviewer: Lizzie Hayes 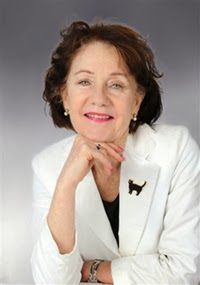 Suzette Hill  was born in Eastbourne, Sussex, in 1941; but has lived in many  locations - the Midlands, Nottingham, Newcastle-upon-Tyne, Berkshire - and finally in retirement to Ledbury in Hereforshire. Although being an English graduate of two universities and having taught ‘Eng. Lit.’ all her professional life, she never did ever contemplate doing any creative writing herself. It was only when she was sixty-four and well retired, that out of idle curiosity she thought she might try her hand at a short story - just to see what writing fiction felt like. And to her ongoing surprise the Bones series is the result!
Publishers Constable & Robinson.  A Little Death is the first in a new series featuring Rosy Gilchrist.
http://www.suzetteahill.co.uk/
Posted by Lizzie at 11:35