‘Nothing Important Happened Today’ by Will Carver 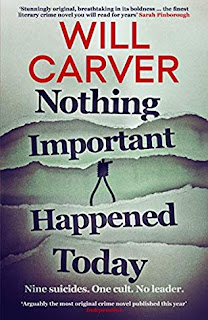 The dedication reads: For nobody. That should alert the reader to the vibes in store in this psychological thriller that will haunt you for a long time.

Nine people from all walks of life, who are strangers to each other, arrive one evening at precisely the same time to a spot on Chelsea Bridge. That very morning in the post a letter had reached each of them that contained a pre-written suicide note and a sheet of paper bearing just four words: Nothing Important Happened Today. After each one ties a noose round his/her neck, they jump to their deaths.

Thirty- two horrified passengers on a train that’s taking them home, after a day’s work, from Victoria Station, witness this weird, chilling event. Two of those witnesses will be the next recruits to die in a similar mass suicide.  The People of Choice is spreading tentacles around the globe and is suggestive of a cult. But how can it be a cult if no one is aware he/she is a member?  How are these people linked? And who’s the evil mastermind? Who is the Leader?

The characters are assigned numbers and the author, without disclosing their names, does tell us quite a lot about them while a social-media page that has lain inactive for years suddenly undergoes a mysterious resurrection, garnering thousands of followers.

The police become involved, flounder and are under pressure to hunt down the twisted perpetrators who are behind it all. Enter Detective Serjeant Pace who picks up the case and fits the pieces of the jigsaw together to bring about an ingenious resolution.
Narrated partly in the third person and in the collective first person the author has constructed an original storyline that’s gritty, riveting, impeccably plotted and packing a punch.
------
Reviewer: Serena Fairfax

Will Carver is the international bestselling author of the January David series. He spent his early years in Germany, but returned to the UK at age 11, when his sporting career took off. He turned down a professional rugby contract to study theatre and television at King Alfred’s, Winchester, where he set up a successful theatre company. He currently runs his own fitness and nutrition company, while working on his next thriller. He lives in Reading with his two children. 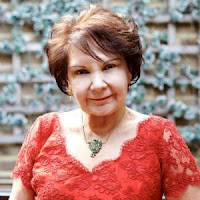 Serena Fairfax spent her childhood in India, qualified as a lawyer in England and practised in London for many years. She began writing by contributing feature articles to legal periodicals   then turned her hand to fiction. Having published nine novels all, bar one, hardwired with a romantic theme, she has also written short stories and accounts of her explorations off the beaten track that feature on her blog. A tenth, distinctly unromantic, novel is a work in progress. Thrillers, crime and mystery narratives, collecting old masks and singing are a few of her favourite things.
www.serenafairfax.com
Posted by Lizzie at 13:39