‘The Night You Left’ by Emma Curtis 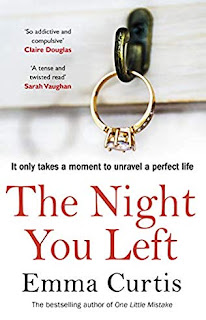 Grace and Nick have been together for 7 years and now on the 14 April 2018 he has asked her to marry him.  Then he went for a walk, but he hasn’t come home.  And he didn’t take the dog.

In desperation Grace telephones the police, but he has only been missing a few hours and they say to report it in the morning. Maybe he’s with another woman, but Grace is sure he can’t be – Nick is the most loyal person she’s ever met.  Something must have happened to him.

The main narrator is Grace, and as the days pass with no news of Nick she struggles to find answers to his departure and his silence.  Interspersed with her search for answers the story switches to July 2000 and much of the tale is told in two separate narrations by Taisie and Nick, which uncovers a tragedy in his past.

While Grace alternates between fear, panic and misery Nick’s parents arrive, and to heap on even more pressure the father of Graces child Lottie, from whose clutches Grace escaped years ago and life becomes incredibly complicated as her life spirals out of her control.

Cleverly plotted, this psychological thriller is an unputdownable read with many twists and a dramatic ending that leaves you gasping, as the secrets from the past emerge. One thing is for sure, no matter how you try to bury it the truth will out, and you can’t escape from it.  I would put this in my top ten reads of 2019, and I probably read around 100 books a year. So, I urge you to put it on your ‘to read’ list. Most highly recommended.
------
Reviewer: Lizzie Sirett

Emma Curtis was born in Brighton and brought up in London. Her fascination with the darker side of domestic life inspired her to write One Little Mistake, her first psychological suspense. She has two children and lives in Richmond with her husband.
Find her on Twitter: @emmacurtisbooks
Posted by Lizzie at 14:56