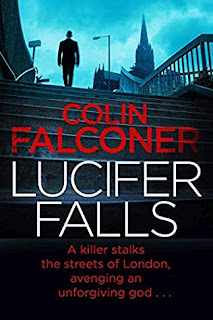 DI Charlie George looks up at the victim and wonders how he got there – the crucifixion of a priest (well, he is wearing a dog-collar) in a derelict chapel is an unusual and sadistic murder and Charlie and his colleagues react in different ways, but with an underlying current of black humour.  As their investigation gets going, news comes of a missing priest, who is quickly identified as the victim.  As Charlie and his colleagues investigate this crime, a police officer goes missing.  Hopes of finding him alive are disappointed when his body is found – another macabre death with religious overtones.  There are few leads and, in the face of increasing media pressure, the DCI is pushing for a result.  Ultimately, the newest member of the team, DC Lesley Lovejoy, comes up with an idea that leads to a desperate confrontation with the murderer.

This is the first book to feature DI Charlie George, his name a reference to the 1980s Arsenal footballer and, aptly, he is based in Islington.  He has his own issues:  a difficult relationship, family issues including his mother who has dementia and is in nursing home.  His down-to-earth attitude and his interest in charity shop clothing provide a balance to his problems.

For a police procedural, the useful glossary at the beginning of the book helps with the alphabet of initials.  The plot moves at a good pace, with some scenes providing a slightly gothic feel to the north London atmosphere.  This is a promising start to a new series and it will be interesting to see how Charlie’s life and career move forward.
------
Reviewer: Jo Hesslewood
Also by this author:  as well as other series and stand-alone books, the second in the Charlie George series:  Innocence Dies

Colin Falconer writes crime fiction and historical fiction. He has written twenty-six novels which have been translated into 23 languages. In between leaving school and securing his latest publishing deal, he found time to chase black witches across Mexico, travel the silk road, and occasionally play the guitar in pubs. His only claim to fame from those days is completing all the verses of ‘All You Need is Love’ during a bar fight in the Stella Maris Sailors Club. After a short stint in advertising he became a freelance journalist. He also worked in radio and television before writing novels.