‘Girl at Midnight’ by Katarzya Bonda 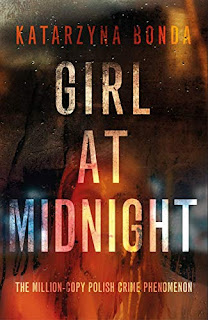 Sasza Zaluska had once worked as an undercover cop in her native Poland and in the course of doing so had become a serious alcoholic after a traumatic case and had also become pregnant. So she had then decided that the best way to get her life back was to go to England and study for a postgraduate degree. She began with geographic profiling of offenders but then switched to psychological profiling concentrating on offender life narratives. Her supervisor, Professor Tom Abrahams, is both demanding and supportive but when she decides to return to Poland, along with her beloved daughter Karolina, he is surprised and not altogether approving. But Sasza is determined; with her English academic qualifications she believes she can move away from crime-related topics and into some well-paid sphere like banking.

Once in Poland she finds a splendid flat for herself and Katarina who will go to a nursery while Sasza’s mother will care for the child when necessary. But all is not going to be as Sasza hopes; even before she leaves the U.K. she receives a mysterious phone call from someone who seems to know all about her and offers her work. She rejects the offer. Within a day of her arriving in Gdansk in Poland she is offered a job: the proprietor of a night club believes that his partner and some of his employees are stealing. He is Pawel Blawicki (Bouli), a former policeman, whose partner is a well-known singer Janek Wisniewski, whose soubriquet Needles is also the name of the club. He had become famous through one song, ‘Girl at Midnight’, although since then both the club and his own singing career have gone downhill. Apparently a well-known criminal, Jerzy Poplawski (the wheelchair-bound Jug-Ears) is behind various threats to the club. In fact, we have already met these characters and a number of others in an episode some years before involving several teen-age boys, Marcin Starok (whose maternal uncle is Jug-Ears and even then heavily involved with criminal gangs), Przemek Mazurkiewicz (whose beautiful young sister Monika Marcin falls in love with), and Needles himself. In that episode the three boys and Monika are trapped not only by the gangsters but by the corrupt police involved with those gangsters – and one of those policemen is Bouli. Confused? It gets more so as the story progresses and Needles is shot and killed and his assistant Isa Kozak severely wounded, and Sasza is drawn into the inquiry into Needles’s killing despite the scorn that many of the Gdansk police have for psychological profiling. It had been suggested that Lydia Lange, a barmaid at Needles, might prove a useful source of information; Lydia is now a suspect but Sasza does not agree with this.

This is an immensely complex narrative, told from the points of view of numerous characters and ranging back and forth, which depicts Polish society as corrupt from top to bottom – not just the police but elements of the judiciary and the business and financial world. Some online reviews have described it as convoluted and I have to say I agree. However, it is at the same time very compelling and I read on, anxious to find out what it was all about and what exactly was the clue hidden in the words of the song ‘Girl at Midnight’.
------
Reviewer: Radmila May 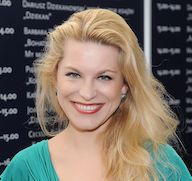 Katarzyna Bonda was born in Poland in 1977 in Bialystok. She was a leading journalist and scriptwriter by profession, before becoming the most popular crime writer in Poland.  All her books have become bestsellers. First published in 2014.  She wrote a criminal trilogy featuring profiler Hubert Meyer (The Case of Nina Frank, Only the Dead Don’t Lie, The Florist). Her most popular series and a huge commercial success (over 2 million copies sold in Poland alone) is The Four Elements of Sasza Zaluska: Girl at Midnight, The White Mercedes, Lanterns and Red Spider. Girl at Midnight received the Readers’ Award at the 2015 Wroclaw International Crime Festival, while The White Mercedes (Okularnik) won the 2015 Empik Bestseller Award. Foreign rights to the books have been sold to 14 countries to some of the largest publishers in the world, including Hodder & Stoughton and Penguin Random House. She currently lives and works in Warsaw.
katarzynabonda.pl