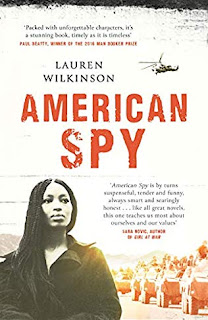 This story certainly has a highly dramatic opening: Marie Mitchell is in her bed in a Connecticut suburb, with her four-year-old twin sons, William and Thomas fast asleep in an adjoining room, when she suddenly awakes to realise that there is an intruder in the house who then makes a murderous attack on her. Desperate to avert any harm coming to her sons she shoots the intruder dead and then shelters with a neighbour. Marie then has to explain to the police that she was acting in self-defence and also that she works for the FBI, the American near-equivalent of MI5. Initially disbelieving and prepared to arrest her, they then accept the truth of her assertions and let her go. Nonetheless, a day or so later, she and her sons, travelling under false passports, seek refuge with her mother Agathe in the former French colony of Martinique. Once there, and feeling at least temporarily safe, she settles down and starts to write a long letter to the boys so that, if anything should happen to her, which she thinks all too likely, they will know who she was and that she was a spy . . . and who their father was. This letter forms the structure of the narrative.

Marie, and her older sister Helene, had, for black Americans in the 1970s, a relatively privileged upbringing in a New York suburb. Their father, Bill (‘Pop’), is a member of the New York Police Force, who sees himself as a loyal American, anxious to serve his country and community but has found that his race has held him back from advancement. The marriage breaks up and Agathe returns to her childhood home in Martinique whike the two girls remain with their father. Growing up, they read a lot of spy stories, particularly those by John le Carre, and this has given them the ambition to work for the FBI or the CIA (the US equivalent of MI6). Marie, encouraged by her father’s friend, Mr Ali, who is one of the very few black employees in the FBI, has also joined ‘the Feds’. Like her father, she is anxious to serve her country and at the time (by now we have got to the 1980s) the U.S., under the Presidency of Ronald Reagan with numerous instances of Soviet spies infiltrating Government departments, is, not unsurprisingly, in the grip of anti-Soviet paranoia. But she too finds that she is confined to largely low-level tasks, not just because of her race but because of her sex. She would like to do more meaningful, and more exciting work, rather than spend her time trying to get information about the various civil rights movements which had sprung up in the U.S. to campaign against the rampant discrimination. And she finds her job makes it difficult to make and keep friends; only her first boyfriend, Robbie Young, a minor criminal, remains staunch although her father, naturally enough, disapproves of him. Then Marie is approached by someone from the CIA – Ed Ross – who wants her to find out more about the president of the former French colony, Upper Volta, now renamed Burkina Faso. He is Thomas Sankara who had taken power in his country by an armed uprising. Once established, he had instituted an enormous number of reforms but what the U.S. didn’t like about him was that he was an avowed Marxist and had the backing of the Soviet Union – this at a time when the U.S. and the Soviet Union were engaged in a number of proxy wars in countries such as Angola. The U.S. supported democratic reforming movements so long as they conformed to the U.S. version of democracy. Sankara is now in the U.S. and Ross, and Rick Gold, an FBI colleague of Marie, want her to go to a civil rights meeting which Sankara will be addressing and find some way of getting to know him. She is a fluent French speaker which is an added asset. It soon becomes plain that Ross and Gold want her to do more than simply get to know Sankara and that Marie is to set herself up as a honeytrap so that the U.S. can influence him. This is not something she is keen on doing, but at her first sight of Sankara she finds him immensely charismatic and attractive. And when they meet it is clear that he is attracted to her.

Eventually, Marie is sent to Burkina Faso in an undercover capacity; her cover is that, having been suspended from the FBI on a trumped-up charge, she is working for an NGO, but her real task is to establish how well-placed is the opposition to Sankara within the ranks of his own colleagues, this opposition being strongly but covertly supported by the U.S. Furthermore, she has a contact within the NGO: Daniel Slater who had been a friend of Marie’s beloved sister Helene who had been killed in a car crash. Helene’s death had devastated Marie; now she very much wants to talk to Slater about her sister. But Slater has further plans for Marie: not just to entrap Sankara by making herself a honeytrap, but to deal with him permanently. But this is beyond anything that Marie is prepared to do, particularly since her feelings for Sankara are now so strong. So, what can she do? And whatever the outcome for Sankara, Marie herself is in immense danger.

This is a very thoughtful and powerful story. I rather like the use of Marie’s letter to her sons as a narrative device, which some on-line reviewers did not, but I do agree with other reviewers who felt that the reason for Marie and her sister wishing to become spies was rather thin. On the other hand the part of the story set in Burkina Faso and its capital Ouagadougou was highly interesting and I would have liked more of the story to concentrate on that part and on Sankara’s efforts to improve his country’s state, doomed though they were in the end. Sankara comes across as a fascinating character, albeit flawed with a conception of democracy far from ours. The general UK public was barely aware of the proxy wars being waged in some African states – after all in the 1980s we had our own troubles (not to say Troubles). Some people may be surprised at the knee-jerk reactions in the US to any whiff of Communism or even attempts at social reform but that has always been an integral part of US political awareness particularly during the Cold War which was still not at an end.

The ending of the book indicates that there is likely to be a sequel.
------
Reviewer: Radmila May

Lauren Wilkinson earned an MFA in fiction and literary translation from Columbia University, and has taught writing at Columbia and the Fashion Institute of Technology. She was a 2013 Centre for Fiction Emerging Writers Fellow, and has also received support from the MacDowell Colony and the Djerassi Resident Artists Program. Wilkinson grew up in New York and lives on the Lower East Side. American Spy is her first novel.

Radmila May was born in the U.S. but has lived in the U.K. since she was seven apart from seven years in The Hague. She read law at university but did not go into practice. Instead she worked for many years for a firm of law publishers and still does occasional work for them including taking part in a substantial revision and updating of her late husband’s legal practitioners’ work on Criminal Evidence published late 2015. She has also contributed short stories with a distinctly criminal flavour to two of the Oxford Stories anthologies published by Oxpens Press – a third story is to be published shortly in another Oxford Stories anthology – and is now concentrating on her own writing.
Posted by Lizzie at 12:57