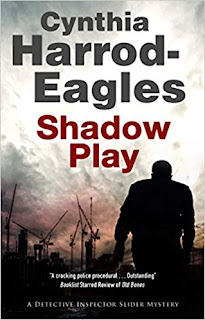 In a rather run-down area of west London, north of Shepherds Bush Green, in a small triangle of land bounded by the railway, Wood Lane and the A40 flyover, in a plot even more run-down than its surroundings, is an equally run-down motor repair shop in the yard of which the proprietor Eli Sampson has found the body of a well-dressed middle-aged man who has died as a result of violence. Sampson calls the police who in their turn call in Detective Chief Inspector Bill Slider and Detective Sergeant Jim Atherton. It is clear that the victim had died elsewhere, and his body had been brought to the yard. But who was he? Why had he been killed? And where had he been killed?

It takes a painstaking investigation by Slider and his team before they can even begin to unpick the puzzle, first with the discovery of a lottery ticket in the dead man’s jacket which leads them to his flat and his name – Leo Kimmelman. But they find that the flat has previously been taken apart by someone else who was clearly looking for something which whoever it was seems not to have found. But Slider and Co, with an inspired guess, do – a memory stick with film of three males indulging in sex games and taking cocaine. Two are young, obviously Eastern European, and are unknown to Slider and Co but the third is not. He is former MP Kevin Rathkeale, now a member of the London Assembly, with special responsibility for youth. It looks as if the film was made for the purposes of blackmail but Rathkeale, when interviewed in his office, while he admits that it is certainly him in the film, denies that he had ever met Kimmelman. Similarly, the two eastern European males deny that they have ever met Kimmelman.

Meanwhile Kimmelman’s occasional girlfriend, masseuse Shanice Harper, turns up and she tells Detective Constable Hart that Kimmelman had described himself to her as righthand man to somebody but she doesn’t know who, although she is insistent that Kimmelman was not an enforcer, not violent, just a ‘someone who fixed’ things. From there the inquiries lead all over the place, to property developers and an unsuccessful plan to redevelop the site where the body was found, to a children’s charity about whose organiser serious doubts had been raised, to a luxury boat moored on the Thames. It is indeed a game of shadows, a clever reference to the ancient shadow-plays of Asia, originating two millennia ago, which evolved through magic lantern shows into early film and from there into the pictures transmitted via the internet so often for destructive purposes.

As usual with this excellent author’s Slider novels, the pages teem with characterful personalities and fizz with lively dialogue. Slider’s own team is always a pleasure to meet on the page: while they banter with each other continually there is between them a true comradeship which mean that they all can work together to bring about a satisfactory conclusion to whichever investigation they are involved in. Recommended.
------
Reviewer: Radmila May

Cynthia Harrod-Eagles was born in Shepherd's Bush in London. She was educated at Burlington School, a girls' charity school founded in 1699, and at the University of Edinburgh and University College London, where she studied English, history and philosophy. She wrote her first novel while at university and in 1972 won the Young Writers' Award with The Waiting Game. Afterwards she had a variety of jobs in the commercial world, while writing during the evenings and weekends. The birth of the Morland Dynasty series enabled her to become a full-time writer in 1979. The series was originally intended to comprise twelve volumes, but it has proved so popular that it has now been extended to thirty-five .In 1993 she won the RNA Novel of the Year Award with Emily, the third volume of her Kirov Saga, a trilogy set in nineteenth century Russia, and she also writes the internationally acclaimed Bill Slider Mysteries. There are now twenty-one books in the series. Cynthia Harrod-Eagles still lives in London, has a husband and three children, and apart from writing her passions are music (she plays in several amateur orchestras) horses, wine, architecture and the English countryside.

Radmila May was born in the U.S. but has lived in the U.K. since she was seven apart from seven years in The Hague. She read law at university but did not go into practice. Instead she worked for many years for a firm of law publishers and still does occasional work for them including taking part in a substantial revision and updating of her late husband’s legal practitioners’ work on Criminal Evidence published late 2015. She has also contributed short stories with a distinctly criminal flavour to two of the Oxford Stories anthologies published by Oxpens Press – a third story is to be published shortly in another Oxford Stories anthology – and is now concentrating on her own writing.
Posted by Lizzie at 16:00