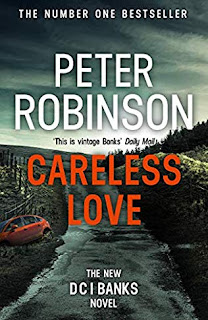 This is this author’s 25th title in his Detective Banks series and he has done as good a job as ever. Banks, recently promoted to Detective Superintendent and twenty years after the breakup of his marriage, is still living on his own in his moorland cottage; none of his various subsequent relationships have worked out but he is currently resigned to his solitary status.

The story begins with the discovery of a young woman’s body in a car on a remote moorland road. She is soon identified as a young local student, Adrienne Munro, and it seems her body has been there for several days. She is dressed as if for a party with a strapless dress and high-heeled sandals but there is no sign of coat or handbag. But the car was not her car; the owners had left it in a layby after another driver had crashed into it and rendered it undriveable. Someone had subsequently placed Adrienne’s body there – but who? And why? The post-mortem indicates an overdose of sleeping pills, but a search of Adrienne’s college room throws up some queries – for a student with limited resources she has a remarkable amount of advanced electronic gadgets, a fine selection of mostly classical music and a good assortment of fancy clothes. Where did she get the money from to pay for all this? And why did such a beautiful young woman with good friends and a bright future ahead of her commit suicide?

At the same time, Banks’s colleague Annie Cabbot is investigating another mysterious death: a middle-aged man has been found dead elsewhere in Yorkshire’s desolate moorlands. Eventually he is identified as Lawrence Hadfield, a semi-retired investment banker. His death appears to be accidental, the result of a fall. There is nothing to link the two deaths except that, like Adrienne, Hadfield had been smartly dressed, certainly not equipped for wandering about the fells in typical winter weather. Nor are there any indications as to how he got there: no sign of any car in which he could have driven to this remote spot. Both he and Adrienne lived seemingly very quiet lives. Even if these deaths seem to be either suicide or accident respectively, rather than actual murder, and even if there seems to be no link between them, Banks is determined to unravel these mysteries. And, after another death, this time with unmistakeable violence, he begins to uncover a web of sexual corruption.

Peter Robinson is a highly experienced and professional writer who has the ability to tell an intriguing and complex story which holds the attention of the reader. In Alan Banks he has created a likeable and thoroughly believable detective who manages to avoid the usual clichés of morose detective protagonists with their customary alcohol, relationship and authority problems. Banks may like the odd drink, but he does not take it to extremes; his taste in music is eclectic (to say the least) so that there is something there for everyone; and he gets on pretty well with his colleagues. In an interview with the magazine Yorkshire Life the author tells us that, although his Yorkshire locations are fictitious, they are based on real life locations. I felt that this strongly enhances the effectiveness the author’s writing; when a character looks at the landscape, we can clearly imagine what he or she is seeing. And there is, at the end of this book, a promise of a continuation from the events described in this story. Recommended.
------
Reviewer: Radmila May

Peter Robinson is one of the world’s most popular and acclaimed writers. The bestselling and award-winning author of the Inspector Banks series; he has also written two short-story collections and several standalone novels, which combined have sold more than ten million copies around the world. Among his many honours and prizes are the Edgar Award, the CWA (UK) Dagger in the Library Award, and Sweden's Martin Beck Award. He divides his time between Toronto and England.

Radmila May was born in the U.S. but has lived in the U.K. since she was seven apart from seven years in The Hague. She read law at university but did not go into practice. Instead she worked for many years for a firm of law publishers and still does occasional work for them including taking part in a substantial revision and updating of her late husband’s legal practitioners’ work on Criminal Evidence published late 2015. She has also contributed short stories with a distinctly criminal flavour to two of the Oxford Stories anthologies published by Oxpens Press – a third story is to be published shortly in another Oxford Stories anthology – and is now concentrating on her own writing.
Posted by Lizzie at 11:57